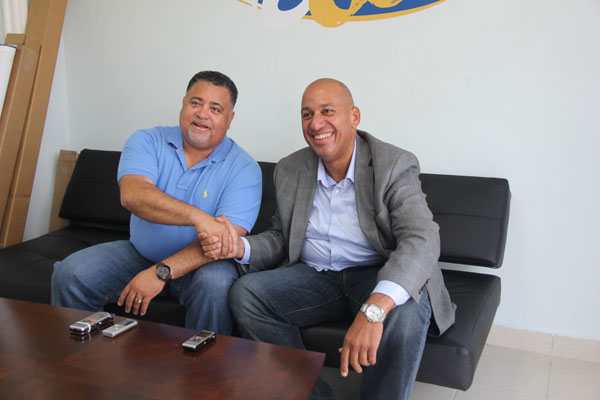 PHILIPSBURG:— Member of Parliament Silvio Matser has declared himself a candidate that will be contesting the September 26th parliamentary elections on the USP slate which is led by MP Frans Richardson.
The USP leader and MP Matser made the declaration on Thursday afternoon in Simpson Bay. Master said that he knew his colleague MP and leader of USP years now ever since they both supported the SPA and the National Alliance, however, they got closer when the USP leader decided to support the former government when he was a member of the UPP. He said during that period he and Richardson spoke a lot and their discussions were mainly on how to move the country forward, and create jobs. He also said that Matser is one of those Members of Parliament that supported his idea to remove from Minister of Justice Dennis Richardson from office. While Matser said he is impressed with the way the USP leader leads his political party. He said everything that the USP leader does is done as a team effort meaning that the board and members of the party are always informed and not left on the sidelines.
Matser made clear that he would not discuss his legal problems but his focus will be placed on how to cut the bureaucracy in government in order to get the country on track. He said for years he has been working behind the scenes on projects one being the causeway bridge and the boardwalk. Apart from that he believes that St. Maarten has to do a lot more to hold on to its economic product which is tourism especially since Cuba is creeping up with lots of projects to further develop their market.
Asked by SMN News how he will be affected knowing that his brother Raymond Matser will also be contesting the election on another slate, Matser said that he did speak to his brother but he also respects his brother’s ambition and wishes. Matser said his brother will be running on one of the new parties and he does wish him well even though he will be taking some votes away from him.
As for reviving the economy both Members of Parliament said they have to work on legislations that will make it easier for government to execute the projects that will create jobs for the people of St. Maarten.
SMN News also asked the two MP’s if they share the same vision as the Prime Minister of St. Maarten who said sometime in the future St. Maarten should work towards independence. MP Richardson said one must look at seeking independence just the same way each child would leave their parent’s home and move on to build their own life. Indeed at some point St. Maarten has to move away from the Kingdom.