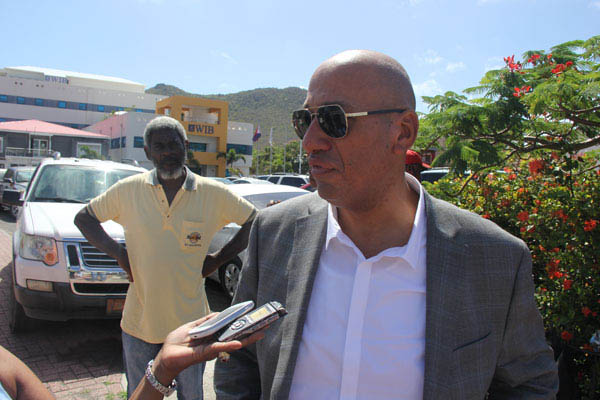 Judge of Instruction will give decision at 3pm on arrest procedures —Merx and Matser refused to attend hearing on Friday due to the fact that no documentation was given to the Attorney. — Judge ruled in favor of Prosecution, Matser remains in pretrial detention, more arrests expected.

PHILIPSBURG:— The prosecution has decided to hold MP Silvio Matser behind bars for the next eight days as the investigation into the Octopus investigation continues. However, the Judge of Instruction will take a decision on the arrest procedures at 3pm today.
Spokesman for the Attorney General’s Office Norman Serphos said that the Prosecution took the decision to hold Master for another eight days. He also said that two other persons were questioned this morning but they were not detained or arrested.
Currently there are five people behind bars in the Octopus investigation, MP Silvio Matser, Eddie Fleming, Rogelio Koieman, and two unknown persons that were arrested on Thursday when they were questioned.

While the prosecutor’s office decided to extend the pre-trial detention of MP Silvio Matser for another eight days. MP Matser and his attorney Cor Merx have decided that they will not appear before the courts at 2pm on Friday because the Prosecutor’s office did not turn over any documents regarding the charges they have against Matser. Attorney at Law Cor Merx who was a former Chief Prosecutor on St. Maarten told SMN News that he and his client chose not to appear in court on Friday afternoon because the prosecutor’s office chose not to turn over any documents to Merx. Merx said at one minute before 2pm he received an email from the judge informing him that he had to be in court at 2pm he said when he informed the judge that he will not be there the court clerk and the judge chose to go and see his client alone at the house of detention. “I have never heard or seen anything like this before and certainly the attitude from the prosecutor’s office is aggravating all criminal lawyers.” Merx further explained beside the election fraud that the Attorney General office said his client is suspected of committing they have chosen to broaden the charges where they stated that he “Matser” is a part of a criminal organization but so far he got no documentation to show what exactly his client was arrested for.
Merx said that the Prosecutor’s office is playing some kind of game which is violating the human rights of all suspects.
Late Friday afternoon the Judge of Instruction ruled in favor of the Prosecutor’s Office and confirmed the arrests procedures of MP Silvio Matser. With that ruling MP Matser will remain behind bars for the next eight days.

The prosecutor released the female suspect identified as D.F on Friday who was arrested and charged for the possession of 400 grams of cocaine D. F was arrested in the home of Eddie Fleming, however, D.F remains a suspect in the drug possession case.
As for the three male suspects who was questioned on Thursday, two of the suspects identified as W.B and J.B were arrested while R.C was released but also remains a suspect in theinvestigation Octopus.
On Friday the investigators questioned two more suspects they are identified as G. W and R.Y after being questioned duo were released but remained suspects in the ongoing investigations.
The Public Prosecutors Office states that more arrests could be made in the Matser’s case (Octopus investigation) during the next few hours and or days.

December 1, 2022
0
PHILIPSBURG:--- The Minister of Education, Culture, Youth & Sport, Rodolphe Samuel, the Department of Sport, and the National Sports Institute are pleased to announce that the proceeds from the 2022 Brown Pelican Sports awards have been donated to the...
Read more