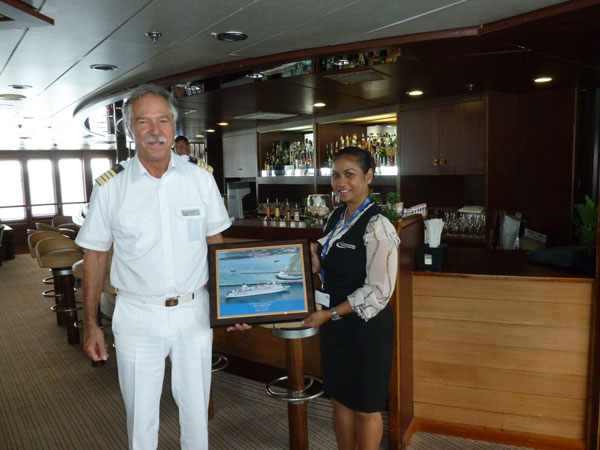 POINTE BLANCHE:— Described as a small classic cruise ship, MS Berlin made its inaugural call to Port St. Maarten on Wednesday on its way to the Mediterranean Sea after spending two months home porting out of Havana, Cuba.

Captain Alberto Tarozzi was welcomed to the destination by Port St. Maarten representative Ichel Moeslikan on behalf of the Government and the Port. Representatives from the ship’s agent S.E.L. Maduro & Sons were also present for the traditional plaque exchange which was then followed by a tour of the vessel.

The Berlin was the first ship ordered by Peter Deilmann and entered service in 1980. In 1982 she operated under charter to Blue Funnel Line who operated her in the Far East under the name Princess Mahsuri. The vessel also starred in the German TV series “Das Traumschiff” which was a German version of the Love Boat.

The vessel features two restaurants as well as several bars and lounges, a small indoor pool, a larger outdoor pool, a small gymnasium, and library.

MS Berlin last port of call prior to Sint Maarten was Amber Cove, Dominican Republic. The vessel offered one-week cruises out of Cuba and the majority of the year it sails throughout Europe.

The majority of passengers are European mainly from Germany and surrounding countries.
Port St. Maarten Management continues to be proactive by attracting new vessels to the destination and at the same time diversifying the country’s tourism market between American and European cruise passengers.