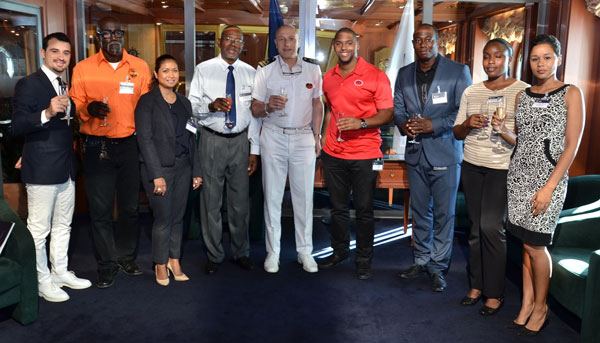 POINTE BLANCHE:—-– MSC Armonia made its inaugural call last week and was welcomed by Port St. Maarten representatives where the official plaque and welcome pleasantries were exchanged.
The Captain, crew, and passengers were welcomed to the destination by Port St. Maarten Management representative Hector Peters on behalf of the Government and the Port.
MSC Armonia is the oldest ship in the MSC Cruises fleet, built in 2001 for the former Festival Cruises. The vessel started to sail under MSC in 2004. The ship underwent refurbishment in 2014-2015.
MSC Cruises, a Swiss-based world’s largest privately-owned cruise line, grew by 800 per cent since 2004, and carried 1.67 million guests in 2014, reported strong financial results with a turnover of 1.5 billion Euro.
MSC Armonia during the summer time caters to mostly European passengers, mainly from Italian, French, Spanish, and German-speaking countries. During the winter months, MSC attracts cruise passengers from the United Kingdom, the United States and Australia as well as a number of Europeans.
The ship carries 2,065 passengers; 760 crew; has 12 decks; and a gross tonnage of 65,542.
MSC Cruises is one of the cruise lines that have been growing its fleet. The cruise line employs 15,000 staff members around the world and is present in 45 countries.
MSC Cruises has a fleet of 12 ships. In 2014 MSC launched an investment plan to support the second phase of growth and in April 2016, the cruise line ordered additional vessels for a total investment of nine billion Euros for up to 11-new next-generation ships which will come into service starting in 2017 to 2026 making the cruise line the third largest.
MSC Cruises is the first global cruise line brand to develop an investment plan of this length and magnitude, spanning a horizon of over 10 years, from 2014 through 2026.
MSC Cruises is the brand market leader in Europe, South America, and South Africa, sailing year-round in the Mediterranean and the Caribbean. Seasonal itineraries cover northern Europe, the Atlantic Ocean, Cuba and the French Antilles, South America, southern Africa, China and Abu Dhabi, Dubai and Oman.