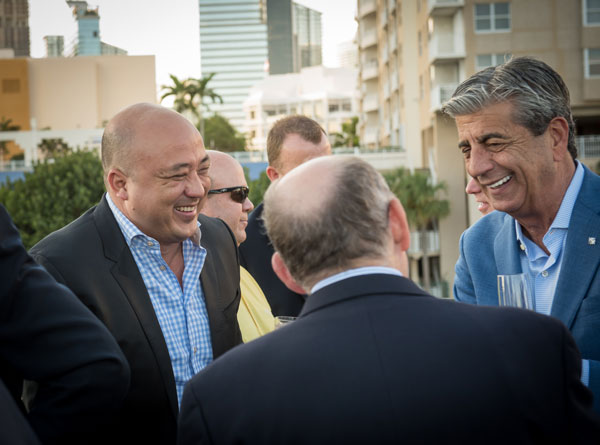 POINTE BLANCHE:— Port St. Maarten Management has had follow-up discussions with MSC Cruises Chairman Rick Sasso regarding a strategic partnership between the cruise line and the Port. MSC Cruises is making considerable investments in constructing Future Larger Vessels (FLV).
The Swiss-based world’s largest privately-owned cruise line will become the third largest cruise company surpassing Disney and Norwegian Cruise Lines (NCL). As the cruise line embarks on major growth in the world’s top cruise market, North America, MCS Cruises has appointed a new US-based president as in Roberto Fusaro.
MSC Cruises which grew by 800 per cent since 2004, carried 1.67 million guests in 2014 and reported strong financial results with a turnover of 1.5 billion Euro. In addition, MSC Cruises forecasted an additional 10 per cent growth in 2015. The cruise line employs 15,000 staff members around the world and is present in 45 countries.
Mid-November at the Executive Partner Summit of Cruise Lines International Association (CLIA) which took place in Miami, Florida, Port St. Maarten Chief Executive Officer (CEO) Mark Mingo, met with MSC Cruises Pierfrancesco Vago, Executive Chairman, who committed to increasing cruise tourism passenger numbers to the destination for the 2017/2018 winter season.
In 2017 MSC Cruises will surpass 100,000 cruise passengers in the New Year.
MSC Cruises made 24 port calls bringing in 71,167 passengers. The forecast for 2016 is 26 port calls and 91,734 passengers, and the outlook for 2017 is 33 port calls with approximately 127,674 passengers.
In 2015 NCL made 42 port calls bringing in 139,419 cruise passengers; forecast for 2016 is 29 port calls with 82,316 passengers; outlook for 2017 is 39 port calls with 101,007 passengers.
In 2015 Disney Cruise Line made 25 port calls bringing 93,579 cruise passengers; forecast for 2016 is nine port calls with 22,700 passengers; and outlook for 2017 is 11 calls with 27,400 passengers.
Port St. Maarten has made considerable investments over the year such as the Walter Plantz Square. The Port is also looking into additional cultural and heritage experiences that cruise passengers are interested in which tells the story about the destination. Many of the passengers taking a cruise with MSC Cruises come from the European Union (EU) whose interests vary and want to learn more about the destination.
“Because of the proactive approach by Port St. Maarten, cruise lines are interested in bringing more cruise passengers to the destination and we are at the stage of developing a strategic partnership. Very important is how cruise passengers enjoy their experience, and this has been very good. In order for the destination to continue to be ahead of the others, we have to continue to invest, and that is where Master Plan 2 comes into play.
“Strategic partnerships are necessary and that is how we can continue to sail into new opportunities that would result in business for the destination over the long-term,” CEO of Port St. Maarten Mark Mingo said on Tuesday.
MSC Cruises has a fleet of 12 ships. In 2014 MSC launched an investment plan to support the second phase of growth and in April 2016, the cruise line ordered additional vessels for a total investment of nine billion Euros for up to 11-new next-generation ships which will come into service starting in 2017 to 2026 making the cruise line the third largest.
MSC Cruises is the first global cruise line brand to develop an investment plan of this length and magnitude, spanning a horizon of over 10 years, from 2014 through 2026.
MSC Cruises is the brand market leader in Europe, South America and South Africa, sailing year-round in the Mediterranean and the Caribbean. Seasonal itineraries cover northern Europe, the Atlantic Ocean, Cuba and the French Antilles, South America, southern Africa, China and Abu Dhabi, Dubai and Oman.
MSC Cruises recently released details of further enhancements to its itineraries in the Mediterranean for the 2017 summer season, and for its itineraries in the Antilles for the 2017-2018 winter season.
MSCs Seaside will be calling at Port St. Maarten on a seven-night Eastern Caribbean itinerary in December 2017. MSC Seaside will lead the way for a new generation of cruise ships with their revolutionary architecture and cutting-edge technology. This new ship will be the first ship in the MSC Cruises’ fleet to be christened in the United States, and thereafter will be sailing in the Caribbean year-round from Miami’s port.