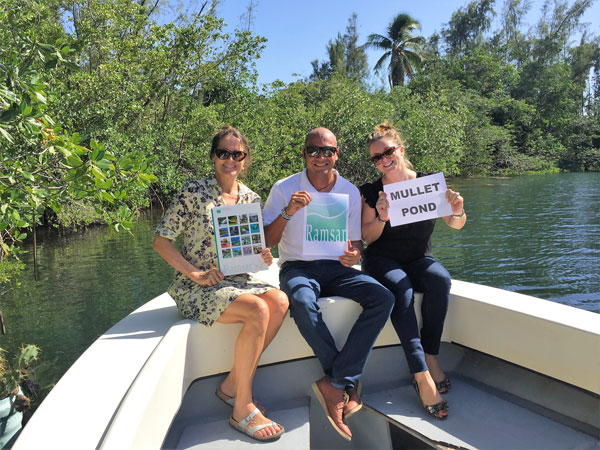 First Such Site for St. Maarten

PHILIPSBURG:— One of Sint Maarten’s most important wetlands, Mullet Pond, has been listed and protected as a wetland of international importance under the Ramsar Treaty last week, marking a significant advancement in the conservation of wetland biodiversity on the island.
The Ramsar Convention, signed in Iran in 1971, is a global commitment to maintain the ecological character of global wetland areas, including in the wider Caribbean region.
The Nature Foundation, the VROMI Ministry, EPIC, the Department of Foreign Relations, the Dutch Ministry of Economic Affairs and the Ramsar Europe Secretariat have been working for almost four years to have Mullet Pond listed as a Ramsar site of global importance; “We have been working so hard for such a long time to first get the political commitment followed by the application process to get the area listed under the Ramsar Treaty. Due to the support of the then Council of Ministers in 2014 and in particular former Minister Maurice Lake and then Prime Minister Sarah Wescot-Williams we received the commitment to have the area protected and listed under the Treaty. We then went through almost three years of the tedious process of having the area submitted according to the guidelines of the Treaty, providing the necessary information for approval by the Ramsar Secretariat. We were therefore quite elated to learn last Wednesday that we now have our first Ramsar Site for Sint Maarten,” commented Nature Foundation Manager Tadzio Bervoets.

Wetlands, including Mullet Pond, are vital for human survival. They are among the world’s most productive environments; cradles of biological diversity that provide the water and productivity upon which countless species of plants and animals depend for survival. They also provide countless benefits or “ecosystem services” ranging from biodiversity, to flood control, groundwater recharge, and climate change mitigation.

At the center of the Ramsar philosophy is the “wise use” of wetlands. The Convention defines wise use of wetlands as “the maintenance of their ecological character, achieved through the implementation of ecosystem approaches, within the context of sustainable development. Wise use can thus be seen as the conservation and sustainable use of wetlands and all the services they provide, for the benefit of people and nature.

The inclusion of a “Ramsar Site” in the List embodies government’s commitment to take the steps necessary to ensure that its ecological character is maintained. Wetlands included in the List acquire a new national and international status: they are recognized as being of significant value not only for the country or the countries in which they are located, but for humanity as a whole.

“Again this is a significant step for Sint Maarten, having our first Ramsar site listed, especially during a time when many of our wetlands are under significant threat from development. Hopefully this is the first of many such designated sites for Sint Maarten,” concluded Bervoets.