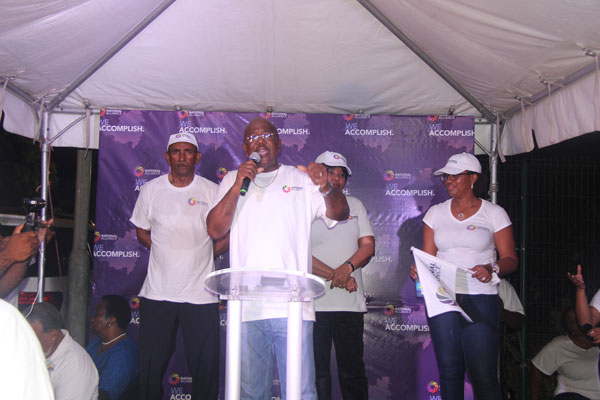 PHILIPSBURG:— All 23 candidates that postulated on the National Alliance slate for the September 26th, 2016 parliamentary elections called on the voters of St. Maarten to give them a majority in parliament and full mandate in order for them to bring about stability in St. Maarten. Most of the candidates, when presented to the sizeable gathering at the National Alliance headquarters in Sucker Garden, pleaded with the people of St. Maarten to bring about a change since there have been five governments in office ever since St. Maarten became a country.

MP Christopher Emmanuel did not mingle with words when he informed the gathering that the leader of the UPP has been in office for 21 years and to date, he has not built a school or social home or provide hot meals for students, yet he gives students pencil cases. Emmanuel said Heyliger was able to fool some of the people of St. Maarten but he wants him to know that he cannot fool all the people all the time.

Minister of Finance Richard Gibson the number 8 candidate on the slate and the man who worked tirelessly to balance the 2016 budget within 3 months said that those in office before him saw doom and gloom because they simply did not know how to balance the budget. Gibson said he does not know what former elected officials did with the people’s monies because they were not able to finish the government building, they could not build a hospital, neither could they give the people of St. Maarten their full pension. He said when he took office St. Maarten had debts everywhere, and is paying huge rents every month for buildings all over the place while the government building sat on Pond Island for 8 years. Gibson called on the people to bring about change, and to do so he said it’s the people of St. Maarten that has to do it because in the end they are the ones that will benefit.
Back on the slate is former Member of Parliament Louis Laveist who was elected on the National Alliance slate in 2010. Laveist said that his only mistake was not to start off his political career with the National Alliance. He said that over the years, the present government is the only government that accomplished a whole lot in a very short time span. Laveist mentioned the government administration building that sat on Pond Island for eight years and none of the other governments could have finished it. He called on the people of St. Maarten to do the right thing and give the NA slate the mandate because they have proven that they are able to accomplish.
New-comer Jimmy Challenger, also a very strong voice called on the people to bring about stability, he said everyone has ten fingers and ten toes, therefore, if the people want change in this country they must award the NA with ten seats.
The National Alliance board and leadership brought in some young blood and new faces, all capable people from the community whom they believe could bring about the changes the country needs badly especially stability.
The leader of the National Alliance credit the Ministers of the current cabinet for all they were able to achieve during the last eight months under his leadership. He said each Minister worked hard to get the country back on track, however, much credit must be given to the Minister of Finance Richard Gibson Sr. whom he said balanced the budget in just three months, thus allowing the government to access monies to complete several projects, such as the completion of the Government Building, ensuring that pensions are now 100% covered.
He said in the beginning Gibson was known as the “no-man” because everything the Ministers asked for when he just took office he stood firm and told them no, until he was able to balance the budget in order for monies to flow so that this government could have installed the camera surveillance project, a proper hospital could be built under the guidance of Minister Emil Lee, proper repairs on Front and Back street by the Minister of TEATT Ingrid Arrindell, the starting of the link 6 by the Minister of VROMI and other projects that the people are not aware of. Marlin also credited the current coalition Members such as DP Leader Sarah Wescot Williams, USP leader Frans Richardson, Independents Silvio Matser, and MP Maurice Lake. Marlin said the NA parliamentarians and Ministers could not have done it alone and thus his coalition partners deserve as much credit.
Marlin lashed out at the Heyliger government who insisted that the parliament of St. Maarten be dissolved in order to curb ship jumping, yet that same political party chose to take the first two ship jumpers and placed them on their list, he said Leona Marlin-Romeo and Cornelius de Weever are the ones that introduced ship jumping on St. Maarten, yet the UP leader chose to have those very persons who started the ship jumping and created instability in the country to be the ones to approach voters to give them the opportunity to bring about stability.
On Sunday night the National Alliance officially opened its headquarters in Sucker Garden from where they intend to march on Monday at 2pm to take on their list at the Government Building.
Besides presenting the candidates and officially opening the headquarters, the NA team put on a show for their supporters with several dancers that included the fire-dancer, apart from that the National Alliance live streams all of its events for persons that were not able to make it to the event or for those living abroad to be able to see from wherever they are.

The 23 candidates on the NA slate are:-

Click here to view photos of NA Launching of candidates on Sunday night.

Source: St. Martin News Network
National Alliance candidates called on the people of St. Maarten to bring about stability by giving them a full mandate.