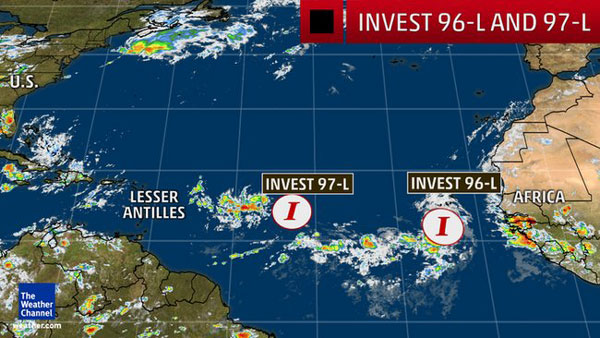 Two areas of interest are being monitored for development in the tropical Atlantic.

Both systems are tropical waves and are not directly affecting land at the moment.

The National Hurricane Center (NHC) continues to watch a pair of disturbances over the Atlantic Ocean that have some potential to develop into a tropical depression over the next few days.

Both areas of interest are tropical waves – a batch of energy and general spin in the atmosphere that develops due to temperature contrasts on either side of Africa’s Sahel region – that are moving west across the central and eastern Atlantic Ocean.
The first tropical wave – designated Invest 96-L – was located just west of Africa, or several hundred miles south of Cabo Verde. This naming convention is used by the NHC to identify features that are being monitored for potential future development into a tropical depression or a tropical storm.
(MORE: What is an Invest?)

As of Friday evening, the NHC indicated that Invest 96-L had a medium (50 percent) chance of developing into a tropical depression during the next five days. The disturbance has a short window of development because it is headed h into a fresh surge of dry air moving into the eastern Atlantic Ocean.
A second tropical wave – designated Invest 97-L – was located more than 1,000 miles east of the Lesser Antilles.

This separate tropical wave has been given a low (30 percent) chance to develop during the next five days. The NHC said that this system’s fast movement was a negative to development. The aforementioned dry air in the region also may be playing a role in keeping convection rather disorganized.

Regardless of development, showers and some gusty winds should spread into the Leeward Islands this weekend, then through the Caribbean Sea next week, typical of most tropical waves.

97-L may enter better conditions in a few days in the western Caribbean.

These are the first tropical waves in the Atlantic Ocean to have a chance to develop this season, which is why they have our attention. However, they both have a long way to go, and there’s plenty of time to monitor the disturbances as they track west, so there’s no need to have any major concerns at the moment.

Technically, the Atlantic hurricane season runs from June 1 through Nov. 30. Much of the tropical activity occurs between the second week of August and the second week of October. In late July and early August, we begin to keep an eye on the eastern Atlantic as it begins to show signs of life.

(MORE: Gulf of Mexico Hurricane Drought Likely to Become the Longest in 130 Years)

In July, a series of tropical waves often form across the Sahel area of Africa and move westward toward the Atlantic coast. The Sahel area lies between the Sahara Desert to the north and wetter areas to the south.

Tropical waves can develop into tropical storms and hurricanes once they emerge into the Atlantic, but because of some unfavorable environmental factors, they tend to not develop in July.

Meteorologists observe trends, however, that can frequently give us a sneak peek of what the heart of the tropical season could look like.

Over the past couple of weeks, we have noticed a series of weak tropical waves that have moved westward, emerging off the African coast. These waves have dissipated rapidly due to lots of dry air, cool ocean temperatures and wind shear in this region.

African easterly waves are shown by clusters of orange cloud tops originating in east Africa, moving west into the Atlantic Ocean.
Now that we are moving toward August, ocean temperatures have risen to about 80 degrees along the African coast – more favorable for tropical development. Each preceding wave has added moisture to the atmosphere in the eastern Atlantic, and the amount of dry air that can inhibit development is eroding.

The latest satellite photograph clearly shows a number of tropical waves in the Sahel region of Africa, which are moving westward.

Tropical waves that emerge off the African coast often develop around or after passing the Cape Verde Islands.

Meteorologists make frequent references to the “Cape Verde” season, which is essentially a season within the overall hurricane season. Most Cape Verde storms develop from mid-August until late September.

There are so many “mouse traps” (unfavorable conditions) in the Atlantic that very few of these Cape Verde tropical storms and hurricanes ever make it all the way to the United States. But there have been some notable Cape Verde storms that made it to the East Coast of the U.S., such as the 1938 Hurricane, Hurricane Hugo in 1989 and Hurricane Andrew in 1992.

Development of tropical waves into tropical storms or hurricanes is determined by several environmental factors that can range from somewhat favorable to extremely favorable, including:

Ocean temperatures
The orientation of ridges (high pressure) and troughs (low pressure) aloft
A moist environment
In general, the ocean temperature needs to be around 80 degrees for tropical cyclones to develop. Off the coast of Africa, that doesn’t usually occur until late July.

Tropical systems like to have winds that are roughly the same speed and direction through a depth of the atmosphere for maximum development. Wind shear – changing winds with height – tends to break up tropical systems that are trying to develop, displacing convection away from a center of circulation.

This often occurs when a trough of low pressure aloft is to the west of a tropical weather system, such that west to southwest winds aloft combine with the typical tropical east-northeast trade winds to produce wind shear.

Enlarge
Expanding high pressure ridge creates a more favorable environment for tropical systems to develop and move westward in the Alantic
In August and September, a high-pressure ridge aloft, known as the Bermuda-Azores high, often expands and creates a more favorable environment for development. Atlantic systems are often steered toward the western Atlantic, Caribbean Sea and sometimes all the way to the U.S.

Since the area from Africa to the eastern Atlantic looks quite active already and we now have a tropical system of interest, it’ll be interesting to see what the rest of the hurricane season will have in store.