GREAT BAY (DCOMM):— The National Reporting Bureau (NRB) for Human Trafficking recently met with Vice Consul for the Dominican Republic Renaldo Alverez, who represents Dominicans residing in the country and are part of the Sint Maarten community.

There are general indicators; indicators with respect to children who have been trafficked; domestic servitude; sexual exploitation; labour exploitation; and begging & petty crime.

The NRB was established in 2013 and works closely with the Immigration and Border Protection Service which falls under the Ministry of Justice. It is responsible for combatting Human Trafficking and Smuggling in Sint Maarten.

To report suspected cases of human trafficking, call Tel.: (721) 542-1553 or email naticotip@gmail.com
All calls and emails are kept confidential! The NRB office hours are from 8:00am till 17.00pm, Monday through Friday, and is located at A.Th. Illidge road #6, Phillipsburg.

November 29, 2021
0
Willemstad/Philipsburg:---This morning, the Court in First Instance of Curaçao gave a verdict in the liability process of the Centrale Bank van Curaçao en Sint...

November 29, 2021
0
~ Nicholas new board President ~ PHILIPSBURG:--- Former Minister Pamela Gordon-Carty was elected as the new political leader of the United St. Maarten (US) party on Sunday, November 28, and immediately made it clear that the party, in or out...
Read more 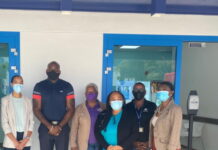