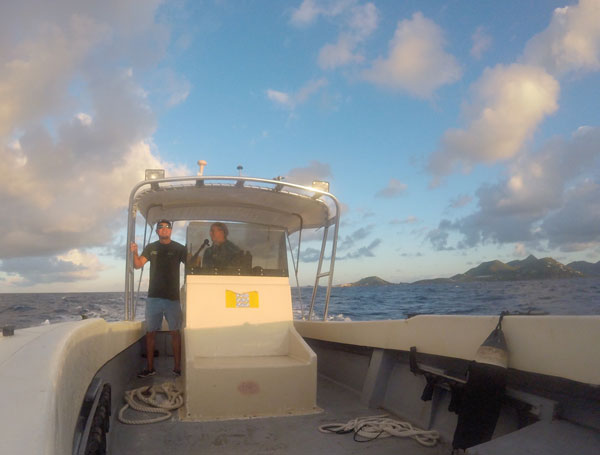 PHILIPSBURG:— The St. Maarten Nature Foundation has increased its patrolling of the Man of War Shoal Marine Park in order to combat illegal fishing activities which traditionally spike leading up to the Easter and Carnival Holidays. Foundation staff will be patrolling during weekends and early morning hours in order to increase their presence in the Marine Park, St. Maarten’s only protected Nature Area; “As the legally mandated Management Authority for the Man of War Shoal Marine Park we are increasing our patrolling leading up to the Easter and Carnival holidays where we often see poachers trying to fish illegally in the Marine Park. It is listed within the rules of the Marine Park that no fishing is allowed, including trap and line fishing. We have a close working relationship with fishermen when it comes to the Man of War Shoal Marine Park and would like this to continue. However if we notice illegal activities within the Marine Park this will be addressed, including the removal of fish traps,” read a Nature Foundation statement.
The boundaries of the Marine Park are between 18̊ ̊N and 17 ̊-57.0 N and 63 ̊-01.03 W and 63 ̊-04.05 W, in an area better known as “the Proselyte Reef Complex “. This area includes the island’s most ecologically and economical important marine habitat, including extensive coral reef areas and seagrass beds. The Man of War Shoal Marine Park, officially established on the 30th of December 2010, is a home and migratory stop over or breeding site for 3 IUCN Red List Species, 10 CITES Appendix I species and 89 Appendix II species. It is an area with a relatively healthy population of marine mammals including migratory whales and dolphins, numerous species of shark, sea turtles and numerous fish species. Studies conducted by the St. Maarten Nature Foundation have shown that biodiversity in this area, particularly coral reef density, is high and the economic goods and services which the ecosystem provides are in excess of fifty million dollars annually.” It has been shown that no-fishing areas have resulted in an increase in fish stock. Therefore it is also in the interest of fishermen to adhere to the no catch rules of the Marine Park,” continued the Foundation.
During a patrol on Saturday morning the Foundation assisted a fisherman locate his fish traps which were placed legally outside of the Marine Protected Area.