PHILIPSBURG:— The St Maarten Nature Foundation initiated their shark tagging program as part of the DCNA Save Our Sharks project funded by the Dutch National Postcode Lottery. This research is aimed to better understand the life characteristics of sharks in St Maarten waters including population structure, abundance and migration. 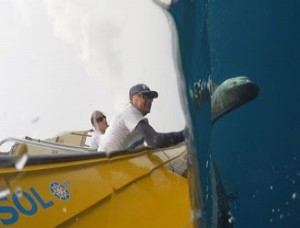 The Nature Foundation tagged four Caribbean Reefs sharks (Carcharhinus perezii) and four tiger sharks (Galeocerdo cuvier), with lengths varying from four to seven feet long. All sharks were measured, equipped with an identification tag and a DNA sample was taken without removing the shark from the water. All sharks were released in good health and hopefully will be identified on other locations in the near future.

In October of this year the Nature Foundation in collaboration with the Saba Conservation Foundation to continue the shark tagging project in the waters of St Maarten and on the Saba Bank.

“Because of books, movies and news reports sharks have gotten a bad reputation as mindless killers. This is very far from the truth. Although accidents do happen so do they with dogs for example, which kill about 100 times more people than sharks do a year. We have been working hard in terms of education, outreach and also science in this case to show the population that sharks are not mindless killers and are very important to the health of our oceans,” commented Tadzio Bervoets of the Sint Maarten Nature Foundation.

Sharks play a very important role in the oceans, on the reefs and taking care of healthy fish stocks. Sharks are at the top of the food chain in virtually every part of every ocean, also on St Maarten. In that role, they keep populations of other fish healthy and in proper proportion for their ecosystem. Sharks are also very important to the tourism sector with many divers traveloing to Sint Maarten in order to dive with sharks.