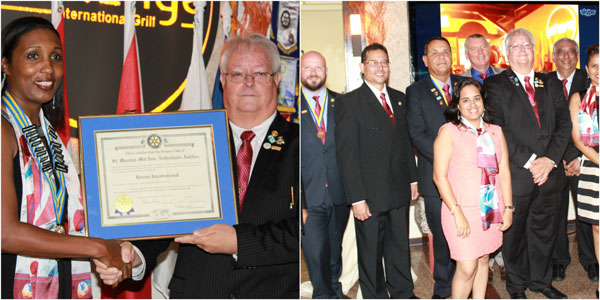 PHILIPSBURG:— When the new Rotary year commences on July 1, 2016, Veronica Jansen-Webster will assume her role as president of the Rotary Club of St. Maarten Mid Isle. She will be the second female president in the 19 year history of the club’s existence, following after Past President Millicent Lopez-De Weever.

The official Change of Board ceremony took place on Saturday June 25, 2016 at Melange Restaurant in Port de Plaisance in a festive ambiance.

The current president, David Antrobus, handed over the club’s original framed charter from Rotary International and after the passing of the gavel and the president’s collar, the new president addressed the gathering.

Besides the club’s signature projects, the new president pledged to commit funds towards a project in the Rotary avenue of service Maternal and Child Health, by introducing a Rotary Baby Welcome Package for young mothers and single mothers in need. These gift bags contain items for the baby as well as for the new mother. Any distributors of baby products can always contact Rotary Mid Isle to find out how they can be a part of this project.

Emphasis will also be placed this year on End Polio Awareness and Rotary’s goal to eradicate polio in the coming years.

Attendees were shown videos highlighting the goals and activities of Rotary International as well as a video about the success of the End Polio Campaign. The new District Governor, Mr. Haresh Ramchandani, was also featured in a video congratulating the new board as he could not be present in person.

After the ceremony there was a buffet dinner followed by dancing. The Rotary year kicked off on a high note.