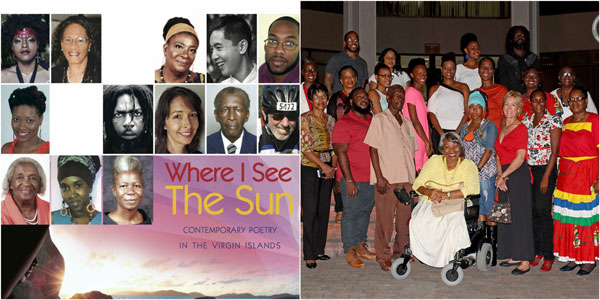 GREAT BAY:— Where I See the Sun – Contemporary Poetry in the Virgin Islands, a new anthology edited by Lasana M. Sekou, “is a wonderful addition to the Virgin Islands’ literacy and legacy,” said Connie George, Chief Education Officer of the Virgin Islands (VI) in Tortola.
The newest title published by House of Nehesi Publishers (HNP) in St. Martin is already receiving reviews from beyond VI shores. The USA poet Craig Czury couldn’t resist a line from one of the book’s poems to describe the collection as “the catch that breaks the nets and draws a village to itself.”
To Marie-Galante novelist Max Rippon, the VI edition of Where I See the Sun is “at the Crossroads of these always questioning seas, sometimes Caribbean, sometimes Atlantic.” The 26 poets and spoken word artists are collectively from Tortola, Virgin Gorda, Anegada, and Jost Van Dyke in the VI.
The book opens with poet par excellence Alphaeus Osario Norman (1885-1942). Norman’s selected poems, such as “The Sea King’s Death” and “Amina Negroes,” have not been previously available to wider Caribbean audiences and lovers, critics, and students of Caribbean literature elsewhere, said Sekou.
Sekou, a St. Martin poet, whose own Book of the Dead was published here in June, said “some of the Virgin Islands writers in Where I See the Sun are new, promising, and their poems reflect that. Others have been reading at VI venues for sometime.”
“There are senior authors or highly skilled wordsmiths such as Verna Penn Moll, Patricia Turnbull, Traci O’dea, and Richard Georges that are competitive as world-class poets. Taken all together, as critic Fabian Badejo reminds us, the smaller geography of some Caribbean territories should not hinder their writers from sharing their critically evaluated writings within their nation and beyond in quality publications,” said Sekou.
Where I See the Sun – Contemporary Poetry in the Virgin Islands contains over 70 mostly never-before-published poems. With the exception of Norman, all of the writers are contemporaries: April Tia Glasgow, Verna Penn Moll, Patricia G. Turnbull, Brandon Tang, Richard Georges, Lavanta Shemeca Thompson, Errol “Daiikiru Maximillion” Percival, Jr., Traci O’Dea, Quincy F. Lettsome, Joe O’Neill, Jennie N. Wheatley, Juana France, Beverly Donovan, Natalio “Sowande Uhuru” Wheatley, Bobbi Fawcett, Kamaal Lettsome, Tracy A. Christopher, Eileene L. Parsons, Leslie Cramer, Jaedia Smith, Nia Douglas, Adell Semper, Diana Stewart-Walker, Kimberly M. Cordes, and Giovanni Herbert.
Where I See the Sun – Contemporary Poetry in the Virgin Islands is available in VI bookstores, from the writers, Van Dorp in St. Martin, SPDbooks.org (goo.gl/qkuOdo), and other bookstores.