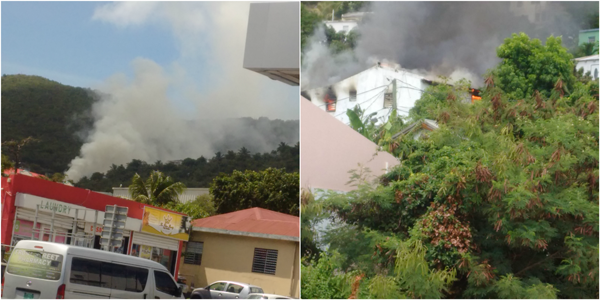 CAY HILL:— The late morning fire that took place in the Shanty Town behind Premier Supermarket in Cay Hill has left 14 families homeless while 9 apartments were fully damaged.

Traffic backed up in the Cay Hill area while police did their best to divert the traffic, some road users chose insult police officers when they were asked to take other routes since the firefighters were busy trying to get to the site.
Residents of the area were not at all happy with the performance of the firefighters because they said that they offered the firefighters the opportunity to enter their property to get to the fire faster since the access road to the known Shanty Town was not totally accessible, however the residents said the firefighters refused to accept their offer and chose to run the fire hose from a further distance in order to obtain water. The building a white concrete structure that had nine apartments was completely damaged by the time the firefighters began pouring water on the blazing building.

Nico Van Zand a senior firefighter was not too pleased with the questions posed by SMN News because the fire department responded late to two fires on Thursday morning. Van Zand said they could not accept the offer from the residents because even the access to the private properties alongside the road were not good enough. He said that one of the fire trucks had a flat tire, another point Van Zand raised was that they had to look at the safety of the firefighters since they cannot endanger their workers. He also said that even though they had trucks with water with that type of blaze the water would have been used up within no time. Van Zand further stated that they had to ensure they hook up to a water hydrant that would have produced enough water to bring the fire under control and to ensure that no one got hurt during the operation.

Click here to view photos of the fire in Cay Hill 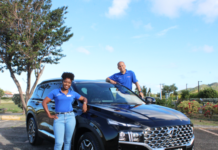