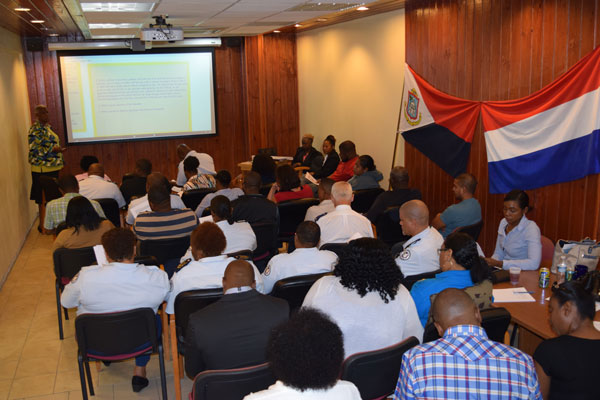 PHILIPSBURG:— During the month of November 2016, the Office of the Ombudsman hosted a series of workshops focused on Integrity, which was attended by all members of the Police Force, including the Management Team, Division Heads and uniformed officers.
The aim of the workshop was to ensure that integrity procedures are followed by all Police personnel, especially where it relates o the handling of complaints.
One major point uncovered during the workshop was that public awareness needs to be raised regarding the procedure of filing a complaint, as most residents do not know that it exists and that the procedure additionally safeguards them from any inappropriate or unacceptable action of law enforcement officers.
The Management of the Police Department is persistent in its efforts to hold their officer accountable for their actions as such strives to educate its officers on all procedures. Given the limited resources available, the Management Team applauds the commitment to serve the community.
In their continued effort to remain transparent, the Management of KPSM hereby like to remind the community of Sint Maarten that a complaints procedure has been in place since June 2015. The procedure is for persons who wish to file a complaint against a member of the Police Force of Sint Maarten.
Reasons for filing a complaint may vary, but may include being dissatisfied with the service they received from an officer or if they believe a matter was not handled correctly, or if you feel that information on your case is not forthcoming.
The complaint Form, which is available at the information counter of the Police Station upon entry to the building, is available in Dutch, English, French and Spanish, and must be completed in its entirety. Or you can send an e-mail to This email address is being protected from spambots. You need JavaScript enabled to view it.
document.getElementById(‘cloak170a3a531385b3d2e2f6594a04651158’).innerHTML = ”;
var prefix = ‘ma’ + ‘il’ + ‘to’;
var path = ‘hr’ + ‘ef’ + ‘=’;
var addy170a3a531385b3d2e2f6594a04651158 = ‘korpschef’ + ‘@’;
addy170a3a531385b3d2e2f6594a04651158 = addy170a3a531385b3d2e2f6594a04651158 + ‘policesxm’ + ‘.’ + ‘sx’;
var addy_text170a3a531385b3d2e2f6594a04651158 = ‘korpschef’ + ‘@’ + ‘policesxm’ + ‘.’ + ‘sx’;document.getElementById(‘cloak170a3a531385b3d2e2f6594a04651158’).innerHTML += ‘‘+addy_text170a3a531385b3d2e2f6594a04651158+’‘;
and request the form in the language of your choice.
Once the form is completed, we kindly ask you to drop it in the mailbox at the Police Station and label it as such. The form can also be scanned and emailed to the secretary of the Chief Commissioner.
If a complaint form is not available or you do not have the opportunity to visit the Police Station, individuals may opt to write a letter or send the complaint electronically via e-mail.
The Chief Commissioner and his secretary receives all complaints and ensures that it is forwarded to the correct department or organization such as the Public Prosecutors Office or the
A confirmation of receipt will be sent to the complaint within 48 hours and a within ten (10) business days an update on the procedure of the case will be provided. An investigation is usually immediately launched and you will be informed of the outcome within 4-6 weeks.
If questions remain, please contact the Chief Commissioners secretary at 542-2222 (ext 201) or email to This email address is being protected from spambots. You need JavaScript enabled to view it.
document.getElementById(‘cloak420f5e7e94fef8dab831f4f107619be7’).innerHTML = ”;
var prefix = ‘ma’ + ‘il’ + ‘to’;
var path = ‘hr’ + ‘ef’ + ‘=’;
var addy420f5e7e94fef8dab831f4f107619be7 = ‘korpschef’ + ‘@’;
addy420f5e7e94fef8dab831f4f107619be7 = addy420f5e7e94fef8dab831f4f107619be7 + ‘policesxm’ + ‘.’ + ‘sx’;
var addy_text420f5e7e94fef8dab831f4f107619be7 = ‘korpschef’ + ‘@’ + ‘policesxm’ + ‘.’ + ‘sx’;document.getElementById(‘cloak420f5e7e94fef8dab831f4f107619be7’).innerHTML += ‘‘+addy_text420f5e7e94fef8dab831f4f107619be7+’‘;
.