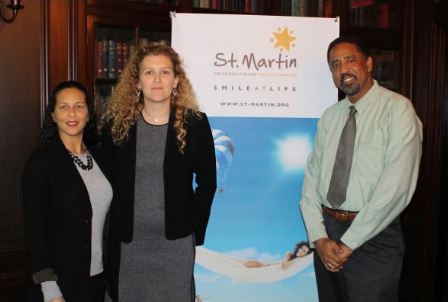 PHILIPSBURG:— On December 13th, the Office of Tourism went to Toronto for a “launching event”, the first of its kind in the capital of Ontario, which was designed to attract more Canadians on our territory.

The Director Kate Richardson and the promotional representative in Canada / Yachting / Cruise, Emile Louisy, went to the largest Canadian city for a day of promotional activities that was organized at the initiative of the Office of Tourism in partnership with Atout France, the agency for tourism development of France. Two highlights marked this visit that was designed to present all aspects of our destination that took place on the grounds of the Fairmont Royal York Hotel. Fifteen Canadian travel journalists were invited to a press luncheon, among them some media heavy weights.

Ms. Richardson interacted with the correspondents of the Toronto Star during a special rendez-vous. During the evening, the Office of Tourism then welcomed 60 tour operators and travel agents. After benefiting from a presentation of the destination, the guests were invited to ask all their questions, among them what was the interest of encouraging Canadian customers to visit St. Martin. The Office of Tourism did not fail to highlight the specificity of the island, the only territory in the Caribbean shared between two nationalities: “Saint-Martin and Canada have several things in common” Kate Richardson noted, in front of the audience. Two languages and one flag for this country in North America, is a political and administrative context that is not without interest for our small island with two aspects.

The interesting feature about Canadians is that they are familiar with Saint-Martin. Besides, they usually return after a first stay. Initially, this customer ops for the all-inclusive or cruise. “These are products used to entice because when they return, they choose another type of accommodation that is more selective, they are more and more interested in the luxury product” Emile Louisy said. “Either the large and beautiful villas or what North Americans call boutique hotels”. With a high GDP, Canada indeed constitutes a market with strong purchasing power for our tourism destination. As Saint-Martin disposes of all the potential to meet the expectations of these citizens, in search of Sun during the winter period, and divers tourist activities. “A touch of Europe”

“The fact that our territory is French is also a strong attraction to the destination for this clientele, whether they be anglophone or francophone,” added Emile Louisy. A little piece of France in the Caribbean isn’t without charm for the Canadian advocates of the language of Molière. “A touch of Europe” headlined paxnews.com in an article published on December 14th at the end of the visit in Toronto. In 2015, St. Martin attracted some 45,000 Canadians who landed at Juliana airport. The Office of Tourism visits there several times a year, especially to represent our island at the travel shows, because all the lights are green for the possibility of doubling the number of visitors.