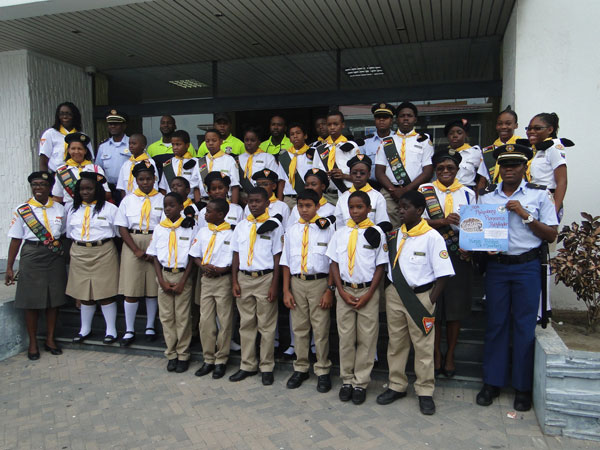 PHILIPSBURG:— On Sunday June 19th, “Father’s day”, the Philipsburg Pioneers Pathfinders club which is a department of the Seventh Day Adventist Church and which work specifically works with cultural, social and religious education of children and adolescents in the age group between 10 and 15 yeas old visited the Police Head Quarters in Philipsburg. Part of their requirements involves giving back to the community and showing appreciation to others. To show their appreciation and gratitude to “the men and women in blue” the pathfinders served all officers on duty for the morning-shift with a very healthy pre-packed breakfast, consisting of Johnnie cakes, vegetarian sausages and soya, different type of fruits, porridge and bush tea.
Mrs. Jacky Barry who is a counselor with the Pathfinders Club stated on behalf of the other leaders that they realize that Police Force has been through a lot of difficulties lately and were more than very happy to bring some cheering to them.
The Police spokesman chief inspector Ricardo Henson on behalf of the Chief of Police and the management team accepted this wonderful gesture and thank the Pathfinders Club for having them in the minds and hearts. The inspector also encouraged the youngsters to continue to be an example to the others in particular the youth by occupying themselves with positives community oriented projects.