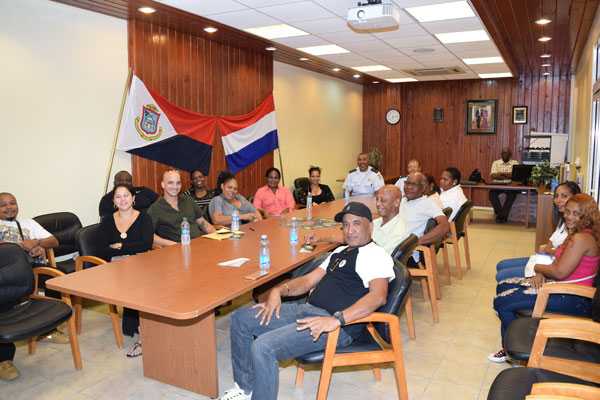 PHILIPSBURG:— For quite some time the Police Department has received numerous complaints from persons in the community and mainly from residents living on the A. Th. Illidge road in the section between the “Cottage Round About” and the entrance of Arch road, also known as “The Strip”. The police have intervened in many of these complaints and taken measures closing these establishments down. This area where several popular night clubs, bars, other after hour’s businesses, supermarkets etcetera are located is also a residential area.
The complaints the police department still regularly receives are concerning issues such as loud music, businesses remaining open after closing hours, fights, traffic back-ups, illegal parking and the lack of proper street lighting, no sidewalks or pedestrian crossings just to name a few. The police department has taken the initiative to address the situation more actively and CPO inspector Felix Richards was given the task to lead and oversee this project.
The owners/operators of the nightclubs, bars and other after hour businesses located in that area were invited by CPO Richards to attend an information session held on Thursday, September 8th, 2016, at the Police Head Quarters in Philipsburg, which they all gladly attended.
The purpose of this meeting was mainly for CPO Richards;
– to become acquainted with the owners/operators of these establishments,
– for the owners/operators to get acquainted with each other,
– to inform and a make them aware of the ongoing situation,
– for all parties involved to jointly look for the best alternatives and solutions, that will allow the residents of that area to enjoy a comfortable living with their families, without any disruptions or disturbances, and at the same time allowing the business owners/operators to conduct their business without repeatedly being reported to the police department by the residents.
During the meeting, a Power Point Presentation was given by CPO Richards regarding the strengths and weaknesses in that business/residential area. The intention of this project is also to involve the department of VROMI to discuss matters regarding the improvement of the infrastructure in that area. This meeting was the first of many follow-up meetings that will be scheduled on the progress of the project in the near future.