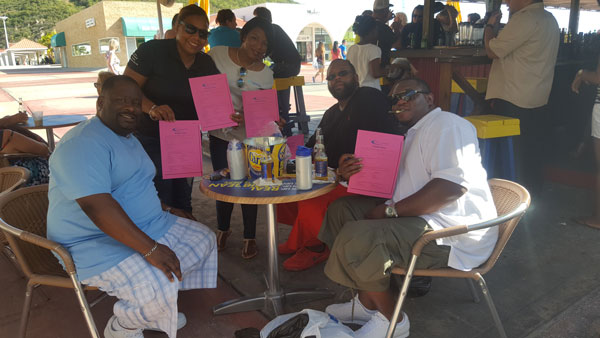 POINTE BLANCHE:— The port has embarked upon a survey to generate vital statistics and data to be used for product reinvention. The survey started on February 2.
Port St. Maarten Management said the survey is an effort to improve product and services by gathering analytical data from both passengers and crew in order to identify what is important to the customer and enhance destination experiences.
“The survey allows participants to rate our current services and advise what we can do to better accommodate their stay while on the island for the day enjoying the amenities on offer by different product and service providers.
“Considering the importance of crew and that they work and reside on the cruise ships, and thus constantly returning to the island during every visit, it’s important to understand their needs as well. Crew play a vital role in passengers’ behavior and view of a destination and so identifying the needs of the crew members is also very important.
“The surveys have been well received and much appreciated by passengers and crew so far. Phase two and three of the survey program will be rolled out at a later date, but we’re very pleased with the results thus far,” Port St. Maarten Management said on Sunday.
Cruise lines also carry out their own Consumer Cruise Lifestyle Trends Survey in order to know what passengers like and prefer and then this leads to actions being taken to meet the needs of the customer. Areas looked at in the aforementioned survey were accommodations, cuisine, entertainment, spa/wellness and shore excursions.
Some of the things that Port St. Maarten is interested in: what are the most popular shore excursions and experiences; what are the fastest growing segments of cruising who visit the destination (families with children, multi-generational families); some cruise passengers cruise to celebrate life milestones with weddings and vow renewals, so can the destination offer something in this area to cruise passengers?
Cruise Lines International Association (CLIA), which Port St. Maarten is a member of, is the world’s largest cruise industry trade association with representation in North and South America, Europe, Asia and Australasia.
CLIA’s 2014 North American Cruise Market Profile January 2015 report stated that a cruise outperformed other vacations, according to past cruisers. The cruise vacation was ranked highest as the best overall vacation. The majority of cruisers (69 per cent) believed it to be a better value over land-based vacations.
The report also pointed out that the greatest benefit cruisers derived from their cruise vacation was the ability to see several destinations in one trip. In fact, 42 per cent of cruisers later returned to a destination first visited during their cruise vacation.
“As a destination, we have to continue to be innovative and offer unique new tours and experiences in order to remain ahead, hence why it is so important to conduct our own survey so we can identify niches and develop new products, services and experiences for our cruise passengers and crew. We have a great destination when compared to others, but we must never become complacent and always look at what we can do better,” Port St. Maarten Management points out.
The country’s cruise industry plays an important role in the economy and makes a considerable contribution. According to the BREA (Business Research & Economic Advisors) Report, which is a survey-based analysis of the impacts of passenger, crew and cruise line spending, that was prepared for the Florida Caribbean Cruise Association (FCCA) and Participating Destinations, October 2015 edition, destination Sint Maarten led all destinations with nearly US$423 million in cruise passenger spending for the 2014/15 cruise season, generating an estimated 9,259 jobs paying $189 million in wage income during the 2014/15 cruise year. This placed Sint Maarten with the highest income impact and the second highest employment impact.
Average per passenger expenditures ranged from a low of $42.58 in Trinidad to a high of $191.26 in Sint Maarten. Sint Maarten with $355 million in total passenger expenditures led all destinations and accounted for 14 percent of total passenger spending among the 35 destinations in the FCCA survey.