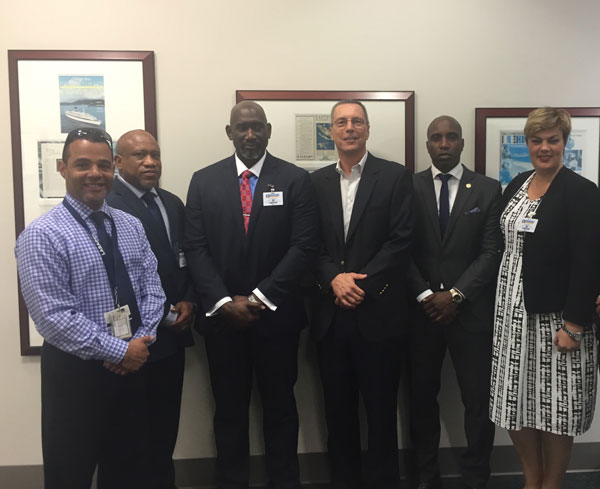 POINTE BLANCHE:—-  Port St. Maarten Supervisory Board and Management would like to congratulate Carl John who has been appointed the nation’s top cop to become Chief of Police of the Sint Maarten National Police Force.
Port St. Maarten has a very good working relationship with the Police Force and with Carl John in particular. John was part of a delegation a few months ago that participate in a Royal Caribbean Cruise Line (RCCL) security conference where a strategic security alliance had been formed.
RCCL allowed a team of security and law enforcement professionals from country St. Maarten to speak at a security conference held by Global Security for the company’s security staff. This conference is held twice a year, and this is the first time that a port destination had been included as speaker at the conference.

This initiative was championed by Mark Mingo, Chief Executive Officer (CEO) of Port St. Maarten, and supported by Minister of Justice Hon. Dennis Richardson of country St. Maarten, and came about as a result of a meeting that Richardson and former Minister of Tourism and Economic Affairs Hon. Claret Connor, held with President of the Florida Caribbean Cruise Association (FCCA) Michele M. Paige, and the association’s security advisers in Miami Florida, a few months ago.

Port St. Maarten Safety and Security Manager Roberto Levenstone, who has worked in the past with Carl John had this to say about the new Chief of Police: “Carl John is a humble man who has risen through the ranks of the Police Force. Being born on Anguilla, and grew up on Curacao with a parent from St. Eustatius, he has always had a vested interest in the Windward Islands.

“Carl John has many leadership strength’s; his passion for people, and always fights for the rights of all individuals that he represented. He is about law enforcement, no class justice, and believes in the sovereign right to stand on your own. He is proactive in his planning and meticulous in the execution.

“We at Port St. Maarten look forward towards a continued good working relationship as we have already built in the past. Congratulations once again to Carl John and the Police Force of Sint Maarten.”