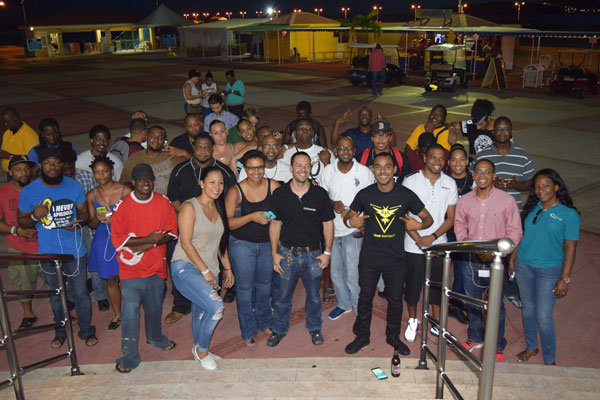 POINTE BLANCHE:— Besides being the number one port in the Caribbean, Port St. Maarten last week Friday may have also become one of the first ports in the Caribbean to join in the Pokemon Go craze.
Last week Friday afternoon between 4.30pm and 7.00pm, local Pokemon Go enthusiasts had the opportunity to play their game as Port St. Maarten has four Pokemon stops and four Pokemon gyms – where players can train up their captured monsters for virtual fights – around the cruise facility.
Pokemon Go was released for iPhone and Android and offers single or multiplayer options. It is an augmented reality game that challenges users to find and catch Pokemon characters in their real world surroundings.
“As you move around, your smartphone will vibrate to let you know you’re near Pokemon. Once you’ve encountered a Pokemon, take aim on your smartphone’s touch screen and throw a Poke Ball to catch it. Be care when you try to catch it, or it might run away,” explains the official Pokemon website.
Due to the large interests that were shown, Port St. Maarten Management decided to also join the craze and offer St. Maarten Pokemon Go players to play at the port.
Management feels that this is a market that tourists are also interested in, especially young people. Today’s traveler is referred to as Millennials who are tech savvy, and Port St. Maarten is ready to tap into the new breed of cruisers which also includes Pokemon Go players.
Pokemon Go was first released in the US, Australia and New Zealand on 6 July and is now available in many more countries. The game has become a global phenomenon.
There were 15.3 million tweets worldwide about Pokemon Go in its first week. Niantic, a Google start-up that became independent in 2015, created Pokemon Go with the Pokemon Company, which licenses the franchise and is part owned by Nintendo.
SimilarWeb reports that players using Pokemon Go spend for an average of 43 minutes per day, and playing every day for one week would burn 1,500 calories for women or 1,800 for men.
Many companies and other entities have joined in the Pokemon Go craze and are using the phenomenon to profile their business.