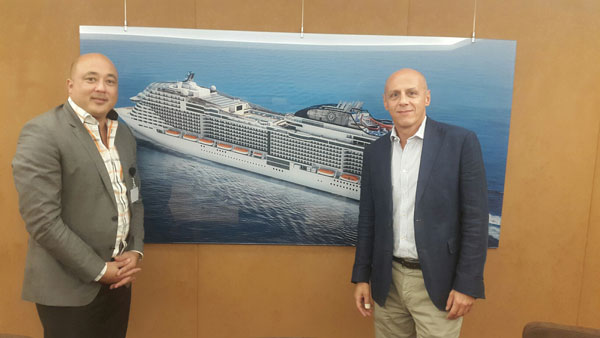 POINTE BLANCHE:—  MSC Cruises is the world’s largest privately-owned cruise line based in Switzerland. It is the market leader in Europe, South America and South Africa.
MSC Cruises has embarked upon a new global brand positioning which supports the Company’s upcoming global growth plan comprising of an investment plan of billions of Euros that will double capacity for the company’s fleet and bring next-generation ships into service between 2017 and 2026.
MSC Cruises has already signed earlier this year a letter of intent with STX France Shipyard for the construction of up to four over 200,000 gross tonnage LNG-technology powered ships with more than 2,700 cabins and approximately 5,400 lower berths occupancy capacity. This new next-generation prototype will form what will be known as the “World Class” of MSC Cruises ships.
MSC Cruises in the first global cruise line brand to develop an investment plan of this length and magnitude, spanning a horizon of over 10-years, from 2014 through 2026, and for a total of up to 11 next-generation ships. The new orders would reflect an additional nearly four billion Euro investment, which will bring the total value of the Company’s 10-plus years investment plan to nearly nine billion Euros. The vessels will come into service between 2017 and 2026.
On September 2nd MSC Cruises, revealed the name of its second STX France built Meraviglia-generation ultramodern mega cruise ship, the MSC Bellissima, which will come into service in the Spring of 2019.
On the same day, MSC Cruises celebrated the float out of the lines first next-generation ultramodern mega-ship, the MSC Meraviglia, due to come into service in June 2017.
Port St. Maarten’s Mark Mingo, Chief Executive Officer (CEO), recognizes this new trend and development and is preparing for MSCs next-generation ships as it did for the Genesis-class vessels of Royal Caribbean Lines back in 2009.
“As a cruise destination, we must never become complacent. We at Port St. Maarten follow industry trends very carefully and plan accordingly to be on the winning side when cruise lines unveil their strategic plans for next-generation vessels. Port St. Maarten will be discussing a strategic agreement with MSC Cruises and preparing for the 2020 launch of their next-generation ships.
“Destination Sint Maarten must be ready for MSCs new class vessel. This cruise line is a major player being the third largest in the world and also number one cargo container line in the world. During our discussions with MSC cruise executives, we discussed current state of affairs; enhancing shore excursions where they offer multi-lingual guides; and Port St. Maarten being prepared for MSCs larger vessels.
“MSC Cruises is a highly ambitious company that will double in size over the next six years. We at Port St. Maarten are making sure to be ready for this development as it unravels,” Mark Mingo, CEO said on Sunday.
Port St. Maarten expects to cater to 1.7 million cruise passengers in 2016 and 1.85 million in 2017. The forecast numbers for 2018 even look better. Most of the lost calls from Norwegian Cruise Lines and Disney are being picked up by other cruise lines such as MSC Cruises which is vital to the further growth of Sint Maarten’s cruise sector.
Between 2016-2026, Disney Cruise Lines will only be constructing two new vessels and Norwegian Cruise Lines and its two other brand lines will build five new vessels.