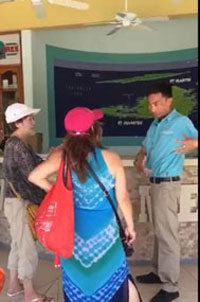 “I would like to congratulate the initiators of the Pearl of China project for bringing such a project to the country. Our port has seen many changes over the past two decades in both cruise and cargo. We have expanded based on market developments, and we continue to plan according to those trends.

“There is tremendous growth taking place in the Asian Region, and we have also lost port calls to this area where cruise is concerned. A study from Cruise Lines International Association (CLIA) in its 2016 Asia Cruise Trends, reported that the cruise industry in Asia is growing at a record pace and shows no signs of slowing down. The Pearl of China project and its HUB function that is envisioned for Sint Maarten will lead to growing our economy for the next decade and beyond once the project comes fully online within two years.

“As the Chief Executive Officer (CEO) of the Port St. Maarten Group of Companies, I fully endorse and congratulate all those who have been involved in making this project come to fruition. We haven’t seen much economic development over the years, and expansion of our economy is part of the port’s business.

“There has been real growth in Chinese travel around the world, and this project will facilitate in bringing a new market to the country which we should embrace. Stay-over Chinese tourists could be converted to cruise passengers and with our homeporting role expanding for the next season, Chinese tourists taking a cruise out of Sint Maarten will also become a possibility in the mid to long-term.

“The CLIA study revealed that Asian source markets experienced the most growth year over year in ocean cruise passengers with an impressive 24 per cent increase from 2014 to 2015 and a total of 2.08 million passengers in 2015. Asian cruise deployment, capacity and destinations have also shown remarkable growth.

“There has been an increase in Chinese cruisers in Asia. From 2012 to 2015, the number of Chinese passengers grew at an annual compounded rate of 66 per cent. Growth in 2015 alone was 40 per cent. In 2015, close to one million passengers were from mainland China, representing close to half of the Asian volume, compared to over 700,000 in 2014. In both 2014 and 2015, China has been the world’s fastest growing major source market, but this only represents 3.6 per cent of Chinese traveling outside of Asia. This means for a destination like Sint Maarten, that we can carefully grow our economy by making the necessary investments in various areas to accommodate this new market.

“At the moment, Asian outbound tourism is growing, and the CLIA study found that more than eight out of 10 Asian passengers are primarily exploring Asian destinations which represents 84 percent, but 16 per cent flew to cruise destinations outside Asia to Europe, Alaska and the Caribbean. China has been the world’s fastest growing major source market. Some of our strategic partner cruise lines have made and continue to make major investments in the Asian area and we will explore the opportunities with them that this project will bring.

“The construction phase of the Pearl of China project will also mean new economic activity with the import of building materials that cannot be sourced here via our state of the art port. Once the project is completed, we can look at the opportunities it will bring where the country serves as a HUB for Chinese business people.

“The Panama Canal has expanded. The Chinese have embarked on building another canal in Nicaragua. Major investments have been made around the world by Chinese investors, and Sint Maarten is also getting that opportunity. Our country has already been playing a significant role in serving as a transshipment port, and the interests shown for the island to be a HUB, this can only further enhance this type of business which will translate into more job creation for young Sint Maarteners which Port St. Maarten has been promoting with training and upgrading over the years,” CEO Mark Mingo said on Sunday.

Mingo also reminded that the Port plans strategically in the interests of the country when looking at opportunities for the shareholder, and this was recently seen once again with the signing of a Memorandum of Understanding to establish a key partnership with Global Port Training, to set up a training Outpost in Sint Maarten for planning and resourcing which is key to the cargo business at the port.

The training Outpost Facility will be a key component to Port St. Maarten’s operational excellence platform ensuring quality and certified port operations across the board via establishing various audit models for continued improvement and success of Port St. Maarten, and will also be used as a catalyst to use St. Maarten as a centralized training hub on a regional and international level.

“This new venture that Port St. Maarten has embarked upon of creating a landmark training Outpost Centre, setting the stage for human resource development and excellence in training, could also have significant applications for the HUB function envisioned by the initiators and investors of Pearl of China project for the country. We are poised to fully utilize our strategic position within the north eastern Caribbean to ensure the continued sustainable growth of our country based on opportunities that come forth in the interests of our shareholder the Government and people of Sint Maarten,” Mark Mingo, CEO concluded on Sunday.