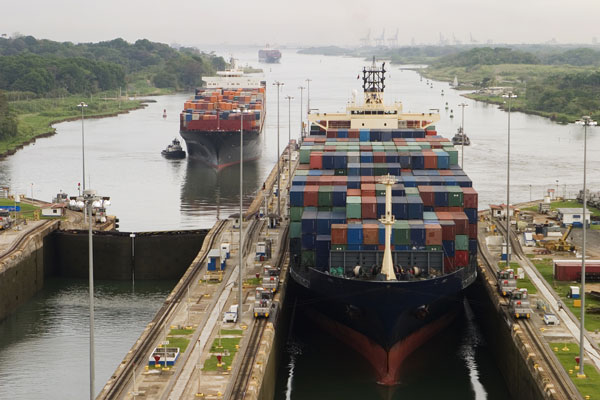 POINTE BLANCHE:— Port St. Maarten Management welcomes the inauguration of the expanded section of the Panama Canal which took place on Sunday. The expansion costs over US$5 billion and took nearly 10-years to complete.
The expansion of the locks is to attract larger vessels and it is expected to boost more exports to Asia from U.S. Gulf ports of LNG, coal and grain cargos. Asian businesses will now be able to ship more goods on larger vessels to the Eastern and Gulf coasts of the U.S. for less money. The larger vessels are able to carry three times more containers, from 5,000 to 14,000.
On Sunday, the 984 foot Chinese container vessel COSCO Shipping Panama cleared the new locks, becoming the first to officially pass through the expanded canal marking a new dawn in global shipping.
Port St. Maarten Management said, Panama is leveraging its two primary assets, its natural geographic location and the Panama Canal, to create an aggressive economic development strategy. “Key to Panama’s strategic location is the waterway, whose expansion, is promoting development in sectors such as tourism, logistics, construction, and insurance.
“Port St. Maarten cargo facility investments have led to a steady growth in containerized business making the island a regional sub-hub for the North Eastern Caribbean. We are prepared for the opening of the expanded Panama Canal, which will place much greater emphasis on feeder ports such as St. Maarten.
“In the latter quarter of 2015, Port St. Maarten made an investment in acquiring a Terex Gottwald Model 6 Mobile Crane from Germany, the largest in the North Eastern Caribbean. This investment bolsters Port St. Maarten’s position with its continued expansion of its cargo related activities and foot print within the North Eastern Caribbean region.
“As a small island nation and a small port, we have accomplished a lot and there is much more to do where we further enhance our role as a regional port player by tapping into the potential increase in sub-feeder vessels to the Region,” Port Management said on Wednesday.
Various government officials, President of Panama Juan Carlos Varela were present for the official opening including approximately 70 leaders.
In April 2015 Port St. Maarten took part in a top level CEO Round Table Meeting with Dutch Prime Minister Hon. Mark Rutte – who was present on behalf of the Dutch Government –, Panama Minister of Canal Affairs Hon. Roberto Roy, and Administrator of the Panama Canal Authority (ACP) Jorge Quijano in Panama City, at the invite of the Dutch Confederation of Netherlands Industry and Employers (VNO-NCW).
During the CEOs Round Table Meeting, some of the issues discussed was the strategic connectivity with the islands and Panama; a diversification strategy; a five-year plan Energy policy; impact of the opening of the Panama Canal third lock and opportunities in new feeder connections; improving the investment climate between Panama and St. Maarten (Law41/E-zone); fiscal incentives; and maritime cooperation with Panama and the Caribbean Region. Panama’s Law41 of 2004, designates Panama Pacifico Special Economic Area as a center of high technology manufacturing, logistics and services center for world trade.
The Panama Canal is over 100-years old. The inter-ocean canal was initially constructed by the United States who relinquished control and turned it over to Panama in 1999.