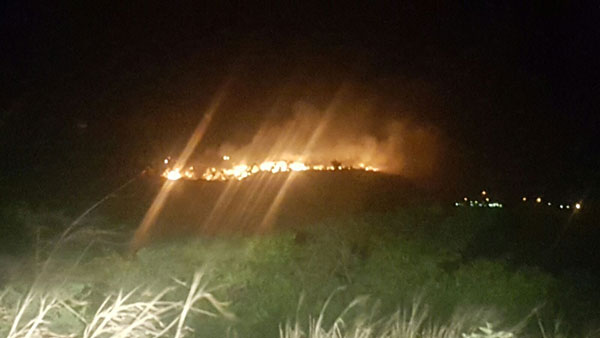 Complaint will be filed with police department.

PHILIPSBURG:— At least two persons were seen Wednesday night running away from the landfill after setting it alight. Leroy Lapaix contacted SMN News late Wednesday night and stated that around 8pm Wednesday night he was driving on the Pondfill road when he noticed a small flame on the landfill. Lapaix said he immediately went to the landfill and took his heavy equipment and put the fire out. He said after doing that he walked around the landfill to ensure there was no other fire or flame. Lapaix said when he saw that everything was under control and there was no sign of fire or smoke he went home.
The contractor that is managing the landfill said about an hour after reaching home he received a phone call from his brother informing him that the landfill was blazing with a huge fire.
The businessman said he was in disbelief because he was there just about an hour before and there was no sign of fire on the landfill. He said when he reached the landfill his security guards told him that they saw two men running away from the dump into Windward Roads compound. “The security guards told me that they could not run after the two men they suspected set the fire on the landfill because it was already blazing and besides that the two men had vanished in bushy area by Windward Roads. 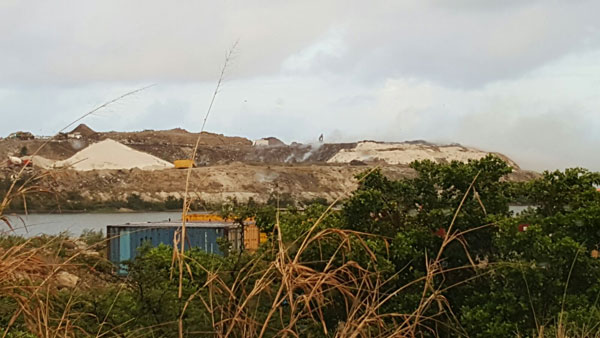 Lapaix said he called in the fire department and the fireman that responded told him that based on what he saw it looks more like arson and not the landfill catching a fire. “I want to make clear I did not tell the firemen what my security guards told me and I also want to emphasize that the fire that broke out after 10pm was not in the same area I saw the small flame earlier and that I went and put out. The fire last night was deliberately set by two men. I went to the police station to file a complaint but the officers at the station told me to return there at 8 am on Thursday morning with the guards so they could take a statement from them. Even though the blaze last night was a big one I managed to put the fire out but there is still some smoke emanating from the fire.”
Lapaix further stated that it appeared as though certain people is against him ever since he started to manage the landfill and hauling garbage because some residents are deliberately throwing their garbage out after the garbage is picked up and they are throwing it on the roadside and not in the bins.

April 18, 2021
0
PHILIPSBURG:— Independent Member of Parliament Christophe Emmanuel on Sunday said that government paying NAf 15 million a year in property rental is neither tenable nor acceptable in a time when public and private sector workers are being asked to...
Read more