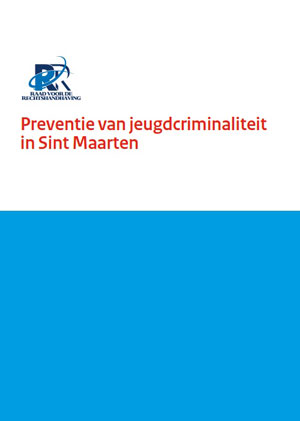 PHILIPSBURG:— Juvenile delinquency, in general, exists all over the world, to some degree. It ranges from ‘innocent behaviors’ to serious offenses committed by minors. Children are entitled to a healthy and balanced growth and development.

Where offenses are committed, focus should be on appropriate, and where necessary, coercive measures to prevent deviant and criminal behavior, notes the Law Enforcement Council in its most recent report on the issue of preventing juvenile delinquency in St. Maarten.
Furthermore, measures should be geared to prevent a repetition of offenses.

Based on its own investigations, the Council has noted a lot of interest for this topic. The Council discovered that many persons in society and in the workplace are committed to the youth and have an opinion of the problem, since it does affect many persons in the community.

Judging from the latter, the Council concludes that the willingness and preparedness to work on the problem of (the prevention of) juvenile crime in St. Maarten, is widely present.

It notes that there is little structural interaction between the organizations involved, except for the Judicial Case Discussions (JCD) − which at the time of the investigation had ceased for some time. Communication seems an ad hoc affair, notes the council in its findings.
The Law Enforcement Council therefore concludes that no framework for a judicial youth chain has been established. From the interviews conducted, the Council concludes that there is insufficient (clear) harmonization between the organizations and coordination in mutual relations. The organizations operate in a fragmented manner.

Even though the need for a joint approach is recognized, it does not appear to be optimal, at this time.

The Council further observed that both inside and outside of the judicial system, there are several good initiatives for the prevention of juvenile crime in Sint Maarten. But, given the lack of cooperation and coordination, the Council considers that improvements can be made if the Ministries of Justice and ECYS join forces.

Despite the conclusion that in the field of general prevention of juvenile delinquency much is to be achieved, the Council sees improvement in the individual approach to young offenders. Once a young person is under the care of justice authorities, there is an individual plan to prevent a repeat of offenses. Achievements in this good direction have been reached through the strengthening of the Court of Guardianship and the juvenile probation system, as well as through the establishment of the Miss Lalie Center and their approaches. This approach does not only combat juvenile delinquency, but crime in general, notes the council report.

A side note is that the situations looked into often relates to young people that have committed serious offenses. The research shows that these are young people that are often known for some time by various justice authorities as youth at risk and who have experienced either deviant or criminal behavior, (very) bad conditions of upbringing and, in many cases, represent a combination of both.

The Council is therefore of the opinion that additional aspects should be addressed where so-called “entry level crimes” are committed by young people, in order to limit the probability that they develop from bad to worse, without consequences.
The newly (June 2015) introduced legal possibility of a transaction by the police (HALT) provides opportunities to do so. This possibility, however, is still not used due to the lack of necessary regulation and organization of the associated project. Among others, the Council formulated a recommendation regarding this bottleneck.

The full report, including an executive summary, can be found on the website of the Council www.raadrechtshandhaving.com.