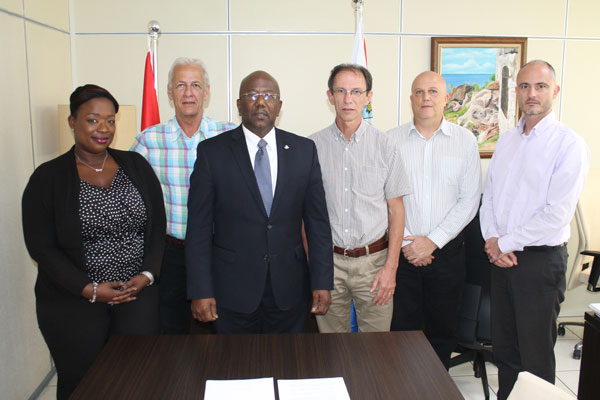 The EDF is the EU’s main instrument for providing development aid to African, Caribbean and Pacific (ACP) countries and to the grouping of countries that still retain ties with the EU known as the Overseas Countries and Territories (OCTs), of which St. Maarten is one.

The financial aid, provided by the EDF, funds cooperation activities in the fields of economic development, social and human development as well as regional cooperation and integration.

In February 2014, in BVI, the Caribbean OCTs unanimously selected St. Maarten as the Regional Authorizing Officer for the 11th EDF Regional Program. The topics selected during the Caribbean Regional Conference in BVI, February 2014, for the 11th EDF Caribbean OCT Regional Program are Sustainable Energy and Marine Biodiversity. The regional program will mobilize the grant envelope of €40 million over the coming six years. The programming is set to be completed within a year and will be submitted to the European Commission for approval. Upon approval, actual implementation will begin in 2017, throughout 2021.

The European Commission contracted a team of experts to assist the St. Maarten delegation in preparing the programming document for the projects in the fields of marine biodiversity and sustainable energy, on a regional level. “What may be considered a priority for one country, may not be considered a priority on a regional level. Therefore it is a must that all 12 countries, within our region, agree on the projects and proposed strategies”, Arnold explained.

“These projects are not be confused with the 11th EDF Territorial Program, which involves the upgrading project of the sanitary sewer in Cole Bay and is being programmed parallel to this program”, Lake added.

The main objective of the program is to prepare all OCTs, within the region, for global and climate change. In recent decades, OCTs’ governments have become increasingly aware of the enormous economic, environmental, and social costs associated with continuing their dependence on fossil fuels (over 95% of the commercial energy needs of the OCTs are met by fossil fuels). Small islands are most vulnerable to oil price fluctuations since their oil imports represent a significant share of the GDP, and these concerns have helped spur a broad national and regional dialogue focused on improving energy security and independence, fostering sustainable economic growth, and reducing greenhouse gas emissions through the development of indigenous and renewable energy resources.

The region is rich in its renewable and alternative energy resources (wind, solar, wave, geothermal etc.) and when these options are strategically introduced as assets to the energy sector, could significantly reduce the strain on the regional economies. The introduction of sustainable energy solutions to the Caribbean OCTs also presents an opportunity for economic diversification and strengthening and could also lead to a positive expansion of possibilities for small and medium enterprises.

Additionally, the Caribbean’s rich marine biodiversity (MBD) not only enhances the ecological value of the region but it also contributes to the economic development of the territories and the well-being of its inhabitants. As such, MBD can be considered as another pillar of the regional economy on the one hand, and on the other, a social-cultural safety net for permanent island community residents, by providing them with the necessary resilience for confronting the increasing impacts associated with climate change and food insecurity. However, mounting pressure on MBD over the past three decades has led to the region being classified as one of the most threatened marine ecosystems on the planet.

“If the prices of the oil go sky-high, the answer for survival lies in the ocean. If we do not control the volume of fish depleted, the islands will suffer immensely” Joe Ryan, Marine Biodiversity Expert explained.

Ryan also explained the threats of coral depletion. “Killing the coral surrounding the reefs disrupt the ability for the islands to bounce back from storms. The coral buffers the storm waves and protect the beach lines”, Ryan stated.

The depletion of coral also has an impact on our tourism sector, Ryan explained. Results of a recent survey indicated that a large segment of tourists are most likely not to return to the islands if the corals continue breaking and washing up on the beaches. “We need to be pro-active in protecting the coral, as 500 year coral is being damaged daily and just a touch of damage to coral could take over 25 years to grow back”, he added.

Lake explained that protecting our oceans allow a possible means for economic diversity.
“Fisheries and farming can stimulate economic growth in our region”, she added.

The program when completed, must address these issues and provide viable recommendations for the Caribbean OCTs.

The Prime Minister and the St. Maarten delegation will attend the 11th EDF Caribbean Regional Workshop and Steering Committee Meetings, Trilateral Meetings with the Netherlands and the European Commission, the OCTA Ministerial Conference and OCT EU Forum in Brussels from February 22nd – February 26th, 2016.