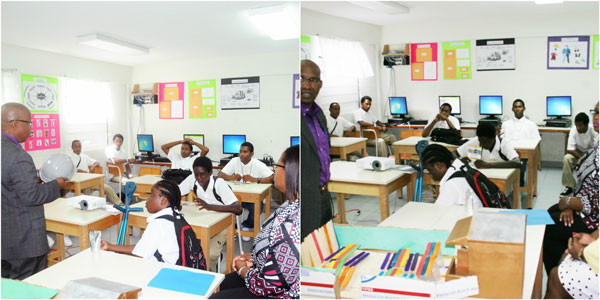 South Reward:— Many of our students in high school in the exam classes are busy with their final exams. We have wished all of them on our radio program “Another View” and via the media much success. Some of our students have applied for study financing and hoping to receive it upon successfully completing their final exams. This means that many of them will be leaving to go abroad to further their studies or to attend the University of St. Maarten and the NIPA. However, the majority of those graduates will remain on the island seeking employment for a year, some until they decide to further their studies. The remaining students in the hundreds will be seeking permanent employment starting the beginning of June 2016.
There are several companies that have started laying off workers because we have entered the so called slow season during this period of the year. Fewer cruise ships are calling on St. Maarten and our stay over guests are on the decline. Above and beyond those young graduates that are entering the job market for the first time we also have to deal with many young people that were employed with a short term contract that ended in April or May of 2016. Talking about the short term contracts we are still waiting on the Parliament of St. Maarten to address the abuse of those temporary contracts.
Nevertheless, we are at a very serious cross road with hundreds of young people entering the job market and fewer jobs to offer them. The OSPP has submitted a law that was passed in 1989 in the parliament of the former Netherlands Antilles commonly referred to as the “Lei di Bion” to all the members of the parliament of St. Maarten and the Council of Ministers. Both the members of Parliament and the government of St. Maarten NA, UP, DP and US refused to even entertain the existence of this law and the benefits for our young people. This law, if it was accepted would have allowed the businesses to employ young people between the ages of 18 to 25 who have been registered as unemployed at the labour department. The businesses would have been exempted from paying payroll taxes for those employees if they were employed for at least one year. We proposed instead of exempting the businesses from paying payroll taxes to provide them with a tax credit of 50% of the minimum wage at the end of the year. Our proposal would not have interfered with the collection of payroll taxes by the government.
The OSPP has also forwarded a proposal to the UP and NA lead governments to establish a loan guarantee program that would assist many young people to acquire loans to start their own businesses. This also fell on deaf ears of our elected and appointed representatives. It is a known fact that small businesses are the backbone of every economy.
After all these efforts failed to encourage past and present governments to establish programs to create jobs for our young people we have decided that there must be something we can do to put our young people to work. We have been communicating with Mrs. Rita Bourne-Gumbs, Acting School Manager and Ms. Ashayna N. Nisbeth, Job Training Coordinator of the St. Maarten Vocational School and Messrs. Carty and
Garrin of the Milton Peters College as to how we can best put our young people to work. They have been cooperating from the beginning to get this program of the ground.
Today we are very happy to inform you that we have established a partnership with two local contractors, Singh Construction N.V. and Patterson Electrical Co. These two companies together with Steward Dev. Corp. N.V. have agreed to employ at least six young men that will be graduating from the St. Maarten Vocational School this year 2016. Their employment can commence as early as Monday, May 30, 2016. These young graduates will be employed in the field of construction and it is the intention that they will grow within this industry. Each employee will be provided with a safety hat and a pair of safety shoes to prevent any mishaps on the job. They have been informed what is expected of them on the job and how they will be compensated. They are all very eager to get started and they are looking forward to their first day on the job.
It is our dream and hope that these young men will succeed and they will be the catalyst to open the doors for more graduates of these schools and others to find suitable employment. We are asking other companies to join this program to enable our young people to find employment this year and thereafter. The students from the third forms from these schools once the new school year 2016 -2017 begins will also be able to do job training at these companies and others who join the program. It will enable them to continue employment with these companies upon their graduation. We will be contacting other companies to get involved to put our young people to work. We can’t stay on the outside and when some type of crime is committed start blaming the young people. We must make sacrifices now or otherwise we are going to pay dearly in the very near future.