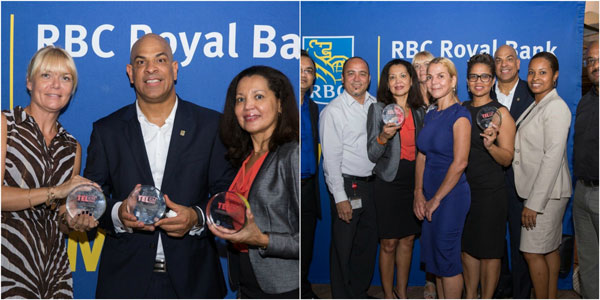 PHILIPSBURG:— Recently RBC Merchant Bank (Caribbean) Ltd. hosted an event in St. Maarten in celebration of the successful execution of a USD 32,000,000 TelEm Group Bond issue. The bond issue was arranged by RBC and the formal signing with TelEm took place in October, after months of negotiations.

RBC organized an informal gathering for TelEm Group, the investors, and the transaction team to celebrate the agreement and to recognize the effort and support that contributed to the success of the transaction. The Bond issue represents a significant achievement for both RBC and TelEm.

The TelEm Group will use the proceeds of the Bond issue to finance future capital expenditures and refinance existing debt obligations. This bond supplements a €8 Million loan obtained from the European Investment Bank (EIB) last year for an island-wide “Fibre to the Home” project in St. Maarten. Six major investors are providing the capital required for the Bond. This is the second time that the TelEm Group has successfully approached the regional capital markets to secure large funding from regional investors, according to Mrs. Helma Etnel, TelEm Group Chief Financial Officer.

The Bond and consequent loan arrangement enabled TelEm Group to renegotiate more favorable terms and conditions. Additionally, the telecommunication company will now be accountable to only one company via a trustee, and no longer to several financiers as before.

Andrew Boissiere, Vice President Corporate and Investment Banking of RBC Merchant Bank said: “Our aim is to bring our purpose to life by helping our clients thrive. The transaction process was characterized by challenges, unexpected surprises, and delicate negotiations.

However, an innovative, flexible approach, regional collaboration, and teamwork contributed to a successful outcome. We are very proud of our long-standing relationship with the island of St. Maarten and to continue this path through the TelEm Bond issue. We are pleased that we were able to contribute to the further enhancement of the telecommunication infrastructure of the island.”

To underline the successful achievement Boissiere awarded tool stones to TelEm Group. Etnel said: “We are most thankful to RBC for their patience and hard work in securing this bond arrangement and look forward to a continued relationship.”