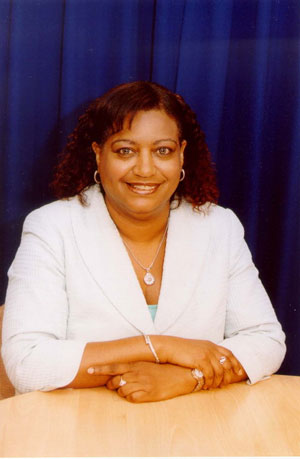 GREAT BAY:— Airport and tourism expert, Regina LaBega was the toast of the gathering at the first Caribbean Aviation Meet Up conference hosted by the Government of the Commonwealth of Dominica, in Rousseau, Dominica from June 14 – 16, 2016.
LaBega gave a power point presentation on the topic, “Sustainable Tourism: Key for Caribbean Airports,” which was very well received. “Everyone asked for a copy of the presentation” following its delivery, said LaBega.
According to LaBega, sustainable tourism can be defined as Jamie Lisse of Demand Media does, as: “Tourism that takes full account of its current and future economic, social and environmental impacts, addressing the needs of visitors, the industry, the environment and host communities.”
“The Caribbean Region is perhaps the most tourism-intensive region in the world,” LaBega stated, quoting CTO statistics that show that tourism was responsible for about 14% of total GDP and generated about 12% of Caribbean employment (both direct and indirect) in 2012.
In 2011, for example, she said there were about 21 million International Tourist Arrivals in the Caribbean bringing in a revenue of US$24.5 billion, with a direct GDP contribution of US$15 billion, an indirect GDP contribution of US$32 billion, and creating 614,000 direct jobs.
LaBega pointed out the crucial role of aviation in supporting tourism, “with over 54% of international tourists now traveling by air.”
Arguing that airports are the gateways and not the destinations, LaBega said “Regional airports can be valuable assets in sustainable tourism development. Airports are the destination’s number one asset to sustain, grow and diversify its economy. Airports, therefore, need to be treated as such by governments,” she added.
According to LaBega, “Visitors to a country get their first and last impression of that country at the airport.”
In her view, “Airports can improve the passenger experience through management of efficient, safe, quality aeronautical services. They can enhance the passenger experience as was done at SXM Airport with the Food & Beverage outlets.
“Research has shown that airports with the best quality passenger experience attract transit passengers who, in turn, support more routes,” she said.
LaBega offered the following five-point recommendation to regional governments: 1. Invest money to promote their destinations; 2. Eliminate lengthy Visa processes; 3. Facilitate easier travel to and within the region; 4. Open up Air Markets (by allowing countries to start services without having to go through lengthy government-to-government negotiations for every new route or airline); and, 5. They should periodically review the capacity of their airports and air traffic infrastructure as compared to projected tourist demand.
She concluded that, “Sustainable Tourism is a permanent work in progress that requires the active involvement by all stakeholders.”
“The role of airports for sustainable tourism is based on the fundamental dependence of the economies of the various islands in the region on the tourism industry,” LaBega said.
“In the end, Sustainable Tourism is the key to an airport’s development and the airport is the key to sustainable tourism.”
According to the organizers, “The focus of the conference is on experience exchange, interaction and participation, rather than on listening to speakers’ career or company’s achievements. The result is a proactive platform upon which successful networking can be built, the perfect place for face-to-face business discussions and comprehensive group opinion exchanges on sector-specific topics.”