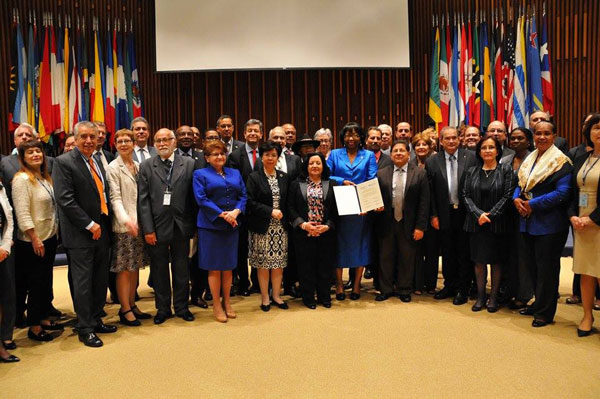 GREAT BAY (DCOMM):— Dr. Virginia Asin, Head of the Collective Prevention Services (CPS), a department from the Sint Maarten Ministry of Public Health, Social Development and Labour, is currently attending the 55th Pan American Health Organization (PAHO)/World Health Organization (WHO) Directing Council meeting currently taking place Washington, DC.
The Region of the Americas is the first in the world to have eliminated measles, a viral disease that can cause severe health problems, including pneumonia, blindness, brain swelling and even death.
Measles is one of the most contagious diseases and affects primarily children. It is transmitted by airborne droplets or via direct contact with secretions from the nose, mouth, and throat of infected individuals.
The announcement came during the 55th Directing Council meeting, which is underway and is being attended by ministers of Health from throughout the Americas.
This achievement culminates a 22-year effort involving mass vaccination against measles, mumps and rubella throughout the Americas.
The declaration of measles’ elimination was made by the International Expert Committee for Documenting and Verifying Measles, Rubella, and Congenital Rubella Syndrome Elimination in the Americas.
Measles is the fifth vaccine-preventable disease to be eliminated from the Americas, after the regional eradication of smallpox in 1971, poliomyelitis in 1994, and rubella and congenital rubella syndrome in 2015.
Before mass vaccination was initiated in 1980, measles caused nearly 2.6 million annual deaths worldwide. In the Americas, 101,800 deaths were attributable to measles between 1971 and 1979.
A cost-effectiveness study on measles elimination in Latin America and the Caribbean has estimated that with vaccination, 3.2 million measles cases will have been prevented in the Region and 16,000 deaths between 2000 and 2020.
The Directing Council meeting is part of the 68th Session of the Regional Committee of WHO for the Americas, and is taking place from 26 to 30 September.