1. I wish to start by thanking Conscious Lyrics Foundation for the honor to participate in this panel discussion 30 years after I gave the first MLK Jr. lecture at the Mairie under the auspices of SMECO. At the time, the evil regime of apartheid was still in full force and Mandela was still behind bars and considered a terrorist by the US and other western powers. When the Universal Declaration of Human Rights (UDHR) was proclaimed by the UN General Assembly on December 10, 1948, three years after the Allied victory over Germany in WWII, the Union of South Africa was one of the few member states that abstained from voting on it. Thirty years ago, there was only one African-American in the US Senate of 100 members. He was the late Senator Brooks with close family ties to St. Martin.
2. In preparing for this panel, I tried to toss around the theme in my head. What does “Reporting Human Rights and Civil Rights in St. Martin and the Caribbean” really mean? “Reporting” in what sense? In the journalistic sense? Or in the sense of keeping a tab on human rights and civil rights violations? Who is doing the reporting and to which body/íes or authority/entity? What, in fact, are human rights and civil rights and how are they upheld or not in St. Martin and the Caribbean? The last question is the one I have decided to address, in other words, to report on today as we celebrate the life and works of Dr. Martin Luther King Jr., perhaps the greatest civil rights leader we have ever known.
3. Human rights
Human rights are universal in nature. They are indivisible and applicable to one and all. They are rights that recognize the dignity of the individual person. The UN Declaration of Human Rights is not in and of itself international law, although virtually all the member states of the UN have approved it. However, it has influenced legislation all over the globe and ranks as the most translated document in the world according to the Guinness Book of Records. It consists of 30 articles and I will focus on a handful of these and how they affect us here on St. Maarten and the region.
1. The St. Maarten Constitution in its section on Fundamental freedoms has 31 articles, the last of which curiously speaks about restrictions to some of the rights set out in the same section. It is unbelievable that on the one hand, the “Constitution” grants all these freedoms, and in the end seems to take some of them away! I am not a lawyer, but I’m sure this should be something for our constitutional experts to figure out. However, let’s go back to the UN Declaration of Human Rights.
2. Article 11 states inter alia:

(1) “Everyone charged with a penal offense has the right to be presumed innocent until proved guilty according to law in a public trial at which he has had all the guarantees necessary for his defense.”

Now, we all know that here on St. Martin (South) where it concerns justice you are deemed guilty until you prove yourself innocent. I can say this from personal experience. You all know I am considered a suspect in an ongoing criminal investigation which has not gone to court yet in six years! That is 72 months and counting! What kind of investigation lasts that long on a 16 square mile territory with a population of 50,000? In the meantime, my life and those of others who are co-suspects in the investigation has been turned upside down. I believe as the saying goes that “justice delayed is justice denied.” We know the cases of others who have had to drag the Public Prosecutor’s office to court in order for this to bring their case to court after so many years of investigation. And what is the public reaction to this? Well, boy, where there’s smoke, there’s fire, some would say. Others simply don’t care until it affects them or their loved ones directly. Remember, when they come for me in the morning, they will come for you at night.
The U.S. State Department issues a yearly report on Human Rights performance around the world. In its 2015 report, published in April last year, it stated regarding the Caribbean that “Other human rights problems included trial delays resulting from court backlogs.”
With regards to the Bahamas it said “A significant backlog of cases awaiting trial remained a problem. Delays reportedly lasted five years or more. Local legal professionals attributed delays to a variety of longstanding systemic problems.”
Unfortunately, the report did not contain any section on St. Maarten.
3. Let’s take a look at article 15 of the Universal Declaration of Human Rights. It states as follows:
(1) “Everyone has the right to a nationality.”
(2) “No one shall be arbitrarily deprived of his nationality nor denied the right to change his nationality.”

Well, I’m sure you know several youngsters, some of them born here, who cannot obtain the Dutch nationality because neither of their parents is Dutch. Many of them are children without a nationality. This is not only a contravention of the UNDHR but also of the UNICEF Convention on the rights of the child.
Curiously, we brag about St. Martin (South) having 150 (or whatever the number may be) nationalities yet we do not have a St. Martin nationality. As far as I am concerned, that is no more than a census data. If we were to put 200 people on Pinel Key, each from a different sovereign country in the world, there would be 200 nationalities there. Saba, with some 2,000 inhabitants has over 70 nationalities! What then is there to brag about in the number of nationalities on St. Martin?

We also saw at the regional level, the international outcry that greeted the decision of the Constitutional Tribunal of the Dominican Republic to render stateless thousands of its citizens mainly of Haitian descent in a retroactive manner as a way to solve its immigration problem. The international community weighed in on the decision because it was seen as a violation of human rights. Had this been viewed as a matter of civil rights, it would have been a domestic issue (as the government of the Dominican Republic tried to claim) and the principle of non-interference in the domestic affairs of sovereign states would have applied.
4. Let me fast forward to Article 21, section 3 which states: “The will of the people shall be the basis of the authority of government; this will shall be expressed in periodic and genuine elections which shall be by universal and equal suffrage and shall be held by secret vote or by equivalent free voting procedures.”
We recently held parliamentary elections on September 26, 2016. The UP party won the election yet ended up with the same number of seats as the party which came second. The UP leader, Theo Heyliger, who was the largest vote-getter, could however not become a minister. Can we honestly argue then that the will of the people, as expressed in the election, is the basis of the authority of government? I’m sure there will be arguments in both directions, but no one can seriously state that the system does not need some revamping.
5. It will be remiss of me if I do not mention article 3 of the UNDHR which says: “Everyone has the right to life, liberty, and security of person.” This right also applies to those serving prison terms. In fact, being in the custody of the state, each inmate should feel even more secure than they would be outside the prison walls. Yet, here in St. Martin, an inmate was gunned down in broad daylight in the Point Blanche penitentiary and no heads have rolled. Another was stabbed, and it is business as usual for all those supposed to guarantee the security of these persons. Isn’t this a flagrant violation of human rights?
6. But what value would human rights have if there is nobody to preserve them, to protect them and to guarantee them? We have perhaps 200 non-governmental organizations on St. Martin and not one of them is dedicated to ensuring that human rights are not violated on the island. Who guarantees human rights on St. Martin (South)? Of course, the Kingdom government.
7. One important action that needs to be taken, therefore, is to set up a Human Rights Watch Group here that can link up with similar organizations in the region and beyond, to report on human rights violations on the island.
Finally, article 26:3 of the UNDHR stresses the need to teach and promote human rights in our educational system. It states: “Education shall be directed to the full development of the human personality and to the strengthening of respect for human rights and fundamental freedoms. It shall promote understanding, tolerance, and friendship among all nations, racial or religious groups, and shall further the activities of the United Nations for the maintenance of peace.”
Are we teaching our children about human rights? The UNDHR should be an integral part of our school curricula.
I thank you. 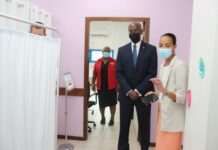