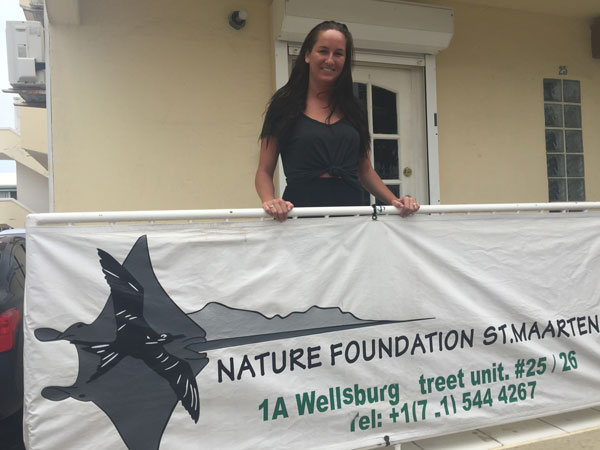 PHILIPSBURG:— The St. Maarten Nature Foundation has announced that they are starting a research project on the socioeconomic influence of the invasive Green Vervet monkey population on the Island and possible control measures to curb what has become a nuisance in the community.

The Foundation has been conducting baseline surveys in order to determine the abundance and level of threat posed by the invasive monkey population on the island while the organization has been increasingly receiving complaints and reports of monkeys causing problems for residents in various districts including: acting aggressively towards residents and pets, overturning garbage bins in numerous districts, destroying gardens and garden furniture and defecating on people’s property.

To control the monkey population, the St. Maarten Nature Foundation needs to understand how big the social and economic damage is inflicted by the animals. Therefore, within the upcoming 2 months, Sanne Collée, a master student in International Development, will execute a thorough (participatory) research on the socioeconomic impact of the invasive Green Vervet monkey population.

The St. Maarten Nature Foundation is a local non-profit NGO (non-governmental organization) officially called the “Foundation for the Management and Conservation of Nature on St. Maarten.” However, in the vernacular named the Nature Foundation St. Maarten (NFSXM). The organization was founded on the 13th of January 1997 on the island St. Maarten, Netherlands Antilles. The Foundation strives to regulate the protection of the flora and fauna within the territory of St. Maarten. It endeavors to conserve, manage and control local biodiversity of the terrestrial as well as the marine ecosystems and environment.