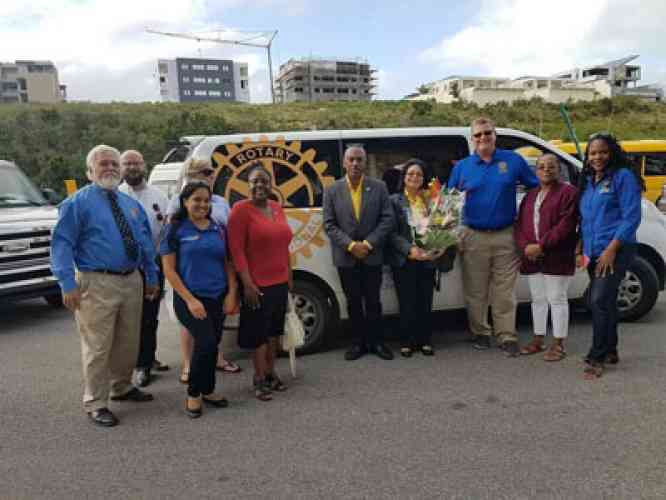 PHILIPSBURG:— Once a year, the District Governor (DG) of Rotary District 7020 makes an official visit to each club in the district, between July 1st and December 31st. The purpose of the visit is to allow the DG to communicate directly with all Rotarians in our District. He is there to listen to the club leadership and gain a better understanding of their club, to provide helpful and friendly advice to club officers as requested and to answer questions about Rotary International and the District. The DG serves as a catalyst to help strengthen the programs of Rotary and ensures that the requirements set by Rotary International are being met.
The current Governor of district 7020 is Dr. Robert Leger. He was born and raised in Les Cayes, Haiti. He went on to study medicine at the Universidad Nacional Autonoma de and graduated as a General Surgeon from Hospital Juarez. Mexico was his home for 11 years and it was there that he met his lovely wife Rosa. In 1981, he returned to his native country of Haiti to fulfill his dream of giving back to his country. Dr. Leger joined Rotary Club Des Cayes in 1983 and was elected President of his Club for two terms. During his 34 years as a Rotarian, he has held all the posts in his club.
DG Robert Leger and First lady Rosa Leger arrived on St.Maarten on January 29th, 2018. They were greeted at the airport by the Assistant Governor Marcellia Henry, President of Rotary Club of St. Martin Sunrise, Damali Bryson, President of Rotary Club of St. Maarten Midisle, Anjali Manek, and President of Rotary club of St. Maarten John Caputo, along with other Rotarians.
The first item of business on the DG’s agenda was to meet with the presidents and secretaries of the various clubs. The next few days the DG spent attending club meetings, board meetings and visiting community projects the clubs had done. He also made trips to St. Barth’s and Anguilla to visit Rotary clubs there. During the meetings, the DG focused on how the clubs and their members were faring in the aftermath of Hurricanes Irma and Maria. Other key items discussed in the meetings were how Rotary can assist in the rebuilding and restoration efforts of the affected islands. The clubs made sure that the DG understood that while the islands were making good progress, there is still a lot of work to be done to get back to the pre-Irma state. The DG emphasized that District 7020 has set aside a disaster fund to help finance community improvement projects. He urged the clubs to develop projects and make use of those available funds.
During his visit, the DG met with officials of St. Maarten/ St. Martin including the Honorable Prime Minister of St.Maarten Leona Romeo-Marlin, His Excellency Governor Eugene Holiday and President of Collectivite of Saint Martin, the Honorable Daniel Gibbs. He also made multiple radio appearances on both the Dutch and French sides.
A fellowship for all Rotarians was held at Emilio’s in Dutch Cul de Sac. DG Robert gave his address at this event, expressing his happiness at seeing the progress and recovery of the islands. He encouraged those present to continue their good work because there was still a lot that needs to be done. Rotary is about community and we are there for them. This occasion was also used to put a few individuals and organization in the spotlight that show true Rotarian spirit “Service above self”. The St. Maarten Club donated a new car to Ms. Mary Bryson of Meals on Wheels, on organization dedicated to bringing food to the elderly and others who are unable to provide for themselves. The car she used for this purpose was damaged during hurricane Irma. The Rotary Club of St. Maarten Midisle awarded Ms. Helen Hart of voices the prestigious Paul Harris Award for her work with youth. The Sunrise Club gave awards to the SXM PAWS organization and Mr. Euriel A. Douglas, a.k.a. Drae. SXM PAWS succeeded to evacuate over 200 cats and dogs that were abandoned after hurricane Irma. Drae has been reroofing the homes of senior citizens free of charge since and is currently working on houses numbers 27 & 28. The DG was very impressed with these noble efforts.
The DG returned to Haiti on February 4th after concluding a successful trip to our islands.