Home Local News Ruthlyn is all smiles after winning TelCell “I Am Carnival” motor car... 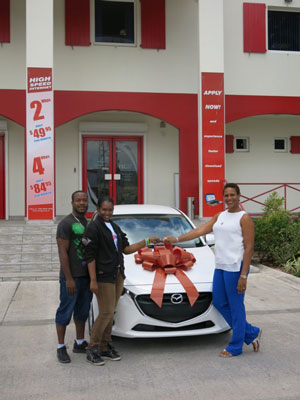 POND ISLAND:— Motor car prize-winner, Ruthlyn Rimon was all smiles after hearing she was the lucky winner of a brand new Mazda Sedan2 motor car. But she saved a bigger smile for daughter, Janeczka, who picked up the keys from the TelEm Group main building Monday after mom donated the prize to her daughter and her son-in-law.
The car was the top prize in TelCell’s “I Am Carnival” promotion for Carnival 2016.

During the promotion, subscribers were asked to send an SMS message to the special number 7777 for a chance to take home the top prize.
“When our computers tallied up the number of SMS messages sent, the winning number that sent the most messages came up and that number was matched to our winner, Ruthlyn Rimon,” said campaign coordinator, Grisha Marten.
According to the lucky winner, the keys and the car goes to her daughter Janeczka Nestor Hubert-Rimon, who is pictured above, picking up “mum’s gift” along with her equally grateful husband.
Meantime, Ms. Martin has thanked everyone for participating in the SMS promotion, describing it as “fun” with a big rush of messages sent as the deadline approached on the final day of carnival.
“As well as the motor car, we also had some other fantastic prizes that made a number of other raffle winners very happy,” said Grisha.
She said TelCell customers can expect other promotions, raffles and contests throughout the year with other great prizes available to compliment more product and service specials being planned for the future.