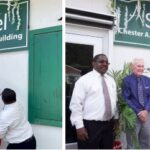 SABA:— On Monday, May 17, International Telecommunications Day, Saba’s telecommunications provider Satel NV, which celebrated its 45th anniversary, honored its former director and telecommunications pioneer Chester Zagers by naming its main building after him.
Satel befittingly utilized the occasion of International Telecommunications Day and the customer appreciation day for the company’s 45th anniversary to pay special tribute to Zagers, who worked for the company for almost 40 years and who after his retirement served as chairman on Satel’s supervisory board for another 10 years.
Sonia Johnson of Satel, who acted as the MC during Monday’s event, reflected on Zagers’ tenure ...