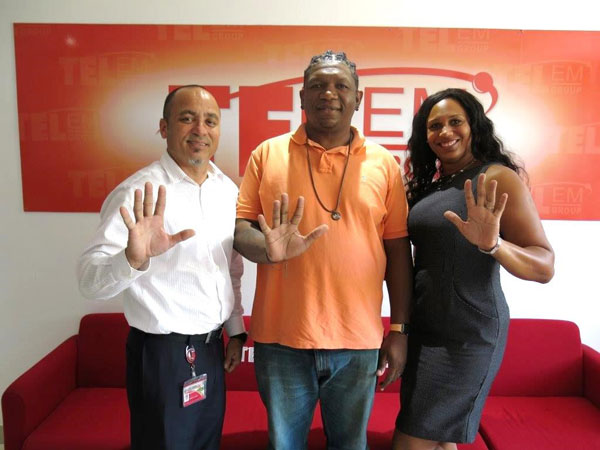 Pond Island:— The St. Maarten Carnival Development Foundation (SCDF) has praised TelEm Group for showing its corporate and cultural responsibility to the community of St. Maarten with the signing a new five-year sponsorship agreement for carnival.

The new contract was signed towards the end of last year after the previous five-year contract came to an end.
“Considering TelEm Group is involved in other sponsorships, promotions, and events during the Carnival season, we are very happy that the company has continued to demonstrate its corporate responsibility by retaining its position with SCDF as the main sponsor of Carnival. We are very happy and proud to partner with TelEm Group once again,” said SCDF President, Mr. Alston Lourens, after a brief signing ceremony last week.

Mr. Mingo said TelEm Group is happy to partner with SCDF for the prestigious annual carnival event because of the cultural aspects but also because of the overall impact carnival has on residents and visitors alike.

“Our support for Carnival has stretched over many years with the relationship between TelEm Group and SCDF getting only getting better and better. We wish Mr. Lourens and his team much success this year and in years to come in the knowledge that they can be assured of our corporate support for another five years,” continued Mr. Mingo.

“In terms of branding, we will continue to have exclusivity in the Festival Village for telecommunication promotions, however, that comes a separate arrangement with the managers of the Village and not the SCDF,” said Grisha.

“What we hope to do this year enhances the relationship we have built with the SCDF over the years to ensure Carnival on St. Maarten reaches new heights with unforgettable experiences for everyone who takes part,” the Manager, Marketing & Sales added.