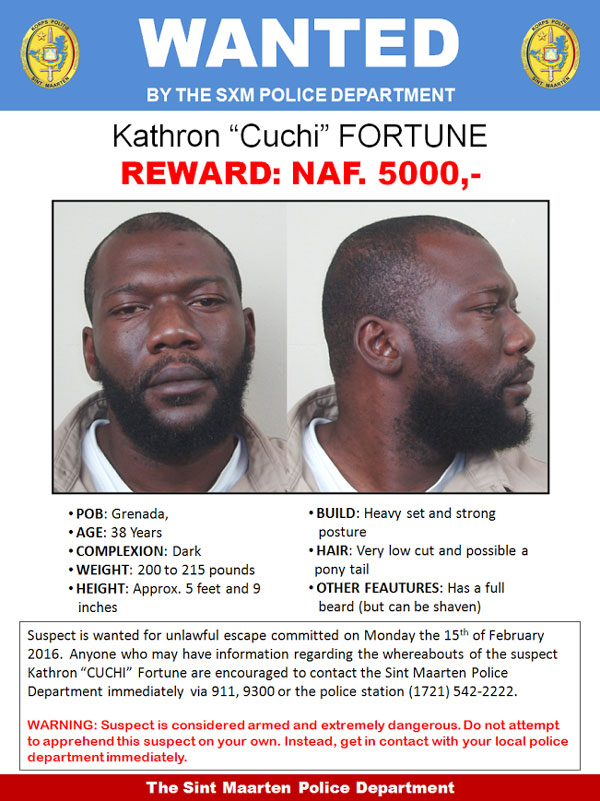 PHILIPSBURGThe Justice Department is informing the general public that the search for Kathron “Cuchi” Fortune is still ongoing and the department is relying on the support, the cooperation and most importantly information from the community to locate and recapture this armed and very dangerous escaped prisoner and now a fugitive of the law.PHILIPS
All departments within the Justice Chain since his escape have been actively busy searching for “Cuchi” which has become priority. Information has been coming into the police department regarding the where about of this fugitive, however the information is still insufficient to accurately determine the location of “Cuchi”.
The entire community is reminded that “Cuchi” has been sentenced for the very serious crime of “murder” for which he has been incarcerated at the Point Blanche Prison prior to his escape. He is also suspected of other vicious crimes committed on the French side of the island and for which he is also sought for by the French authorities.
The escape of “Cuchi” since February 15th 2016 has created an immense feeling of concern for the safety and security of the entire community on both sides of the island. The continued search for “Cuchi” until now did not have any positive results which could have lead to his recapture. The escape of “Cuchi” is considered a serious crime. Any person or persons involved in helping or assisting him to avoid his recapture are also committing a crime.
It has been six weeks since “Cuchi” has escaped and the Justice Department is reminding everyone that “Cuchi” will continue to pose a very serious threat to our communities until he is recaptured and safely returned to prison. No one should ever under estimate this situation and feel comfortable because they believe this is not their problem. On the contrary, “Cuchi’s”