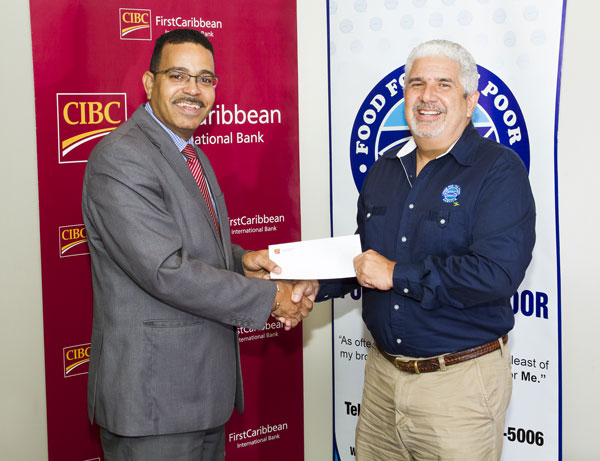 Kingston, Jamaica:—  A second Caribbean charity has received funding from CIBC FirstCaribbean to assist with relief efforts in Haiti, which was severely affected by the passage of Hurricane Matthew last month.

J$1.6M, has been donated to Haiti relief through the Jamaica-based Food For The Poor (FFTP) which is working to disseminate food and other supplies to Haitians affected by the hurricane which hit the island on October 3, 2016.

Nigel Holness, Managing Director, CIBC FirstCaribbean International Bank in Jamaica said that the bank was “very concerned for the well-being of our neighbors in Haiti.” Speaking at the presentation of the cheque to Food for the Poor Executive Director, David Mair, he said that FFTP has a respected history of relief work in Haiti hence the bank’s decision to work with it to assist the communities devastated by Hurricane Matthew.

Commending FFTP for its efforts, Mr. Holness noted that “clean water, food, and shelter are a major priority after a national disaster and we are proud to do our part in ensuring our Haitian brothers and sisters are provided for.”

He said that “while CIBC FirstCaribbean International Bank does not operate in Haiti our neighbor was not spared the wrath of Hurricane Matthew and we must help them however we can.”

In his remarks, Mr. Mair said that “CIBC FirstCaribbean must be applauded for their generosity.” He said the humanitarian response from businesses in Jamaica was outstanding resulting in over seven container shipments to date, of donations of canned food, water and a host of non-perishable items to Haiti.

Food For The Poor, headquarters in Florida, he said, had shipped multiple amounts of relief items as well and the organization’s representatives in Haiti, were focused on feeding and providing shelter for displaced Haitians and helping them develop sustainable incomes.

Last month, shortly after the hurricane hit Haiti, BDS$25,000 was presented to the United Caribbean Trust (UCT) in Barbados to facilitate the purchase and distribution of water filters for the community tanks in the areas in Haiti hardest hit by the Hurricane. The water filters or purifiers which will be installed in schools, orphanages, prisons and churches will give close to one million Haitians access to safe drinking water.

The bank is also finalizing plans to make a sizeable donation to the relief effort in the Bahamas, where one of its largest businesses is located, and which was also significantly affected by Matthew.