Home St. Martin News Network Shaderel Cornet thanks PM Marlin for his ongoing support over the... 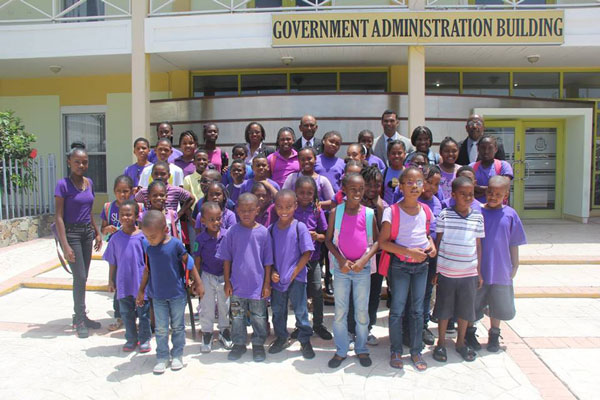 The camp attendees as well as their leaders were all special guests of The Department of Communication Council of Minister’s Live Press Briefing and were engaged by several ministers during the one hour session.

Upon completion of the Press Briefing, camp attendees were granted a tour of the Government Administration Building and also paid a visit to Prime Minister Marlin’s cabinet.

While at Prime Minister Marlin’s cabinet, camp host Ms Shaderel Cornet took the floor to say “Thank You” to the Prime Minister and also asked the children to do the same for his ongoing support of their summer camp.

Cornet stated for the past three (3) years, Prime Minister Marlin made it his custom to contact her every June asking for the camp schedule as he would then choose a day to personally cook and prepare meals for all camp attendees.

Though this year’s meals were not prepared personally by the Prime Minister, they were by his son Cloyd Marlin under his guidance and instructions.

Besides the field trip to the Government Administration Building, over the past weeks; camp attendees have also attended several other field trips and engaged in various other activities such as their career Day and a trip to The SXM Airport.

Prime Minister Marlin extends his sincere gratitude and support to Teacher Shanna and her team for creating such a positive and uplifting program to edify and engage students during their summer holidays.

Prime Minister Marlin not only recognizes the direct positive impact such a program has on our youths but also upholds its benefits of allowing our younger ones to remain active and be less accessible to idleness during their Summer Holiday.

Click here to view photos of the visit during the weekly press briefing.

Source: St. Martin News Network
Shaderel Cornet thanks PM Marlin for his ongoing support over the past three years.