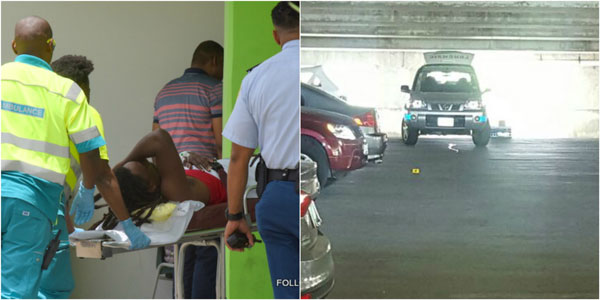 Dawn Beach:— A shooting in the parking area of Westin Resort has left two persons in serious condition that are currently taking medical treatment at the St. Maarten Medical Center, while a third person had to be taken to the medical institution for medical treatment for a broken leg.  Infomation reaching SMN News states that  one of the victim is Karim Lake and all those that are involved in the shooting are employees of Checkmate Security. Lake and the other victim identified as Levi Webster is currently in the ICU section at the St. Maarten Medical Center. Further information SMN News obtained states that Webster is in critical condition as a bullet is lodged in his head and efforts are currently being made to airvac the patient overseas for further medical treatment. SMN News understands after the shooting one of the suspects was seen running away from the scene only wearing a black  short pants and persons were running after him but he disappeared in the bushes in the area. SMN News learnt that a blue car bearing the number plate P- 2214 is the vehicle that took the two shooters to Westin, inside that vehicle some $63,000.00 was found. Even though the shooters escaped in another vehicle. While police are busy investigating the shooting incident that left two security guards seriously injured questions are now being raised as to what Checkmate guards were doing at Westin since the company does not have guards working at Westin Dawn Beach.
SMN News further learnt that the one of the victims Levi Webster is a supervisor/ patrol for Checkmate Security and when the owner of Checkmate heard of the shooting he allegedly went to the St. Maarten Medical Center and approached Dr. Holiday who was busy working on the victim and told him he will give him $10,000.00 cash to save Webster’s life. The source said that Dr. Holiday told the businessman that his job has nothing to do with monies when it comes to saving the life of a person. So far the police are not releasing any information as they are busy investigating the circumstances of the shooting. Another source said that the owner of the Checkmate did not offer Dr. Holiday monies but in fact told the doctor that he had a credit card with a maximum of $10,000.00 which could be used to airvac Webster overseas for further medical treatment if the procedures at SZV were taking too long.
According to Police Spokesman Ricardo Henson some persons fired shots at two male that was on the second floor of Westin parking lot leaving them in serious condition. Henson said the two victims are unable to give police any statement due to the seriousness of their injuries. The police spokesman said a third person who probably witnessed the shooting jumped off the third floor of the parking lot to escape from the gunshots and he suffered a broken leg, sources say the third person who broke his leg is also a local that were part of the group of men that were attacked by gunfire.The police spokesman said the shooters escaped in a small white vehicle after committing their act.
He also confirmed that the incident involves locals and not visitors to the island.
Shooting at West Inn Hotel

On Sunday May 29th at approximately 10.15 a.m. the Emergency Dispatch received the first call of a shooting which had taken place on the second floor parking lot of West Inn Hotel. The callers also stated that at least two persons were injured as a result of the shooting. According to witnesses the suspects may have fled the scene in two small white vehicles after the incident. Immediately several police patrol and paramedics were sent to the location to investigate what had taken place. On the scene the investigating officers and paramedics located two victims who were injured by gun shots. They were both treated on the scene and then transported by ambulance to the Sint Maarten Medical Center for further treatment. The scene was immediately closed off by police for the Forensic Department to collect evidence and conduct an in depth crime scene investigation. Detectives were also on the scene speaking to potential witnesses. Another male person who supposedly was near the scene as shots were fired jumped from the second floor parking lot to the garden below. As a result of this he fractured one of his legs. This person was not shot or injured because of any involvement in this shooting.
The victims in the shooting remain in critical condition in the Sint Maarten Medical Center and were op the press time unable to give any information or statements regarding the shooting. Detectives are busy investigating. As more information becomes available to media will be informed.