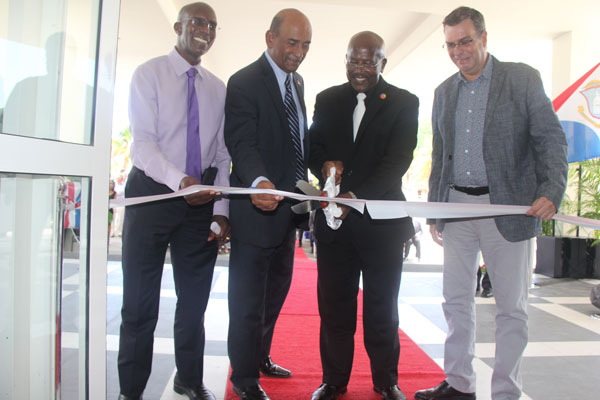 PHILIPSBURG:— The long-awaited opening of the New Government building finally took place on Friday morning under the leadership of Prime Minister William Marlin who is heading the present coalition government.

The soft opening ceremony did not go as smoothly as one would expect since it was supposed to be a glorious day for St. Maarten because a group of lawyers that have been on strike for the past three weeks showed up at the building demanding to the see the Minister of Justice.

However, when the ceremony got underway, Erno Labega the one that was spearheading the completion of the Government Building on Pond Island said that the time and work it took to get them to the opening ceremony is immense. Labega said for years a number of people worked on the building but the last lap since USZV purchased the building was hectic because they were given deadlines by Prime Minister William Marlin.

Director of USZV Glen Carty explained how USZV got involved in the investment project to complete the Government Administration Building. Carty said that Government had owed USZV over NAF 115M was the amount they have in their books as government arrears. He said in 2015 they sat with government and that figure broke down to Naf.75M.

Carty said USZV could have placed liens on government accounts but instead of doing that they negotiated with the current Minister of Finance 2016 whereby the Government Administration Building was sold to USZV and they will, in turn, rent it to the government.

Carty said with years of experience he knows that government does pay salaries and rent and if USZV could collect the rent monies for all the buildings they are paying monthly then USZV will get the monies they invested and that which is owed for premiums. Carty said the government will start paying its rent as of January 2017. He said that USZV took the lead in getting the building ready because they had to make sure the monies were used for its intended purpose.

Finance Minister Richard Gibson, the main Minister who negotiated the agreement with USZV said that government has been paying Naf.800.000.00 monthly in rent and since government had no choice but to settle the debts they have with USZV and APS because it was ordered given by the CFT, he said government was obliged to sell the Government Administration Building which allowed them to get it completed and can now use for its intended purpose, while government would save Naf. 350,000.00 to NAF 400.000.00 every month in rent.

Gibson said government paid NAF70M in rent over the last eight years with nothing to return and the government still does not have anything to show for that NAF70M. Gibson said the government will be paying NAf400.000.00 per month in rent and after a certain amount of years the government will be able to buy back its property and be rent free. Gibson also referred to the statements Carty made when he said USZV could have placed liens or auctions on government, but he wants him and others to know that when the NA-led coalition took office nine months ago they met NAF 180M in debts that they inherited from the former governments. Gibson admitted that he placed some pressure to achieve the goals this government had set when they took office.

Gibson also addressed the protesting lawyers that were present by stating that when he was practicing law, he would tell his clients if people owe them monies they should hire his firm to collect their monies. He also said that the over 40 years he practiced law, he knew the procedures. He said that had he wanted to meet the Minister of Justice or any Minister he would have called and made an appointment and not just march in during an opening ceremony. 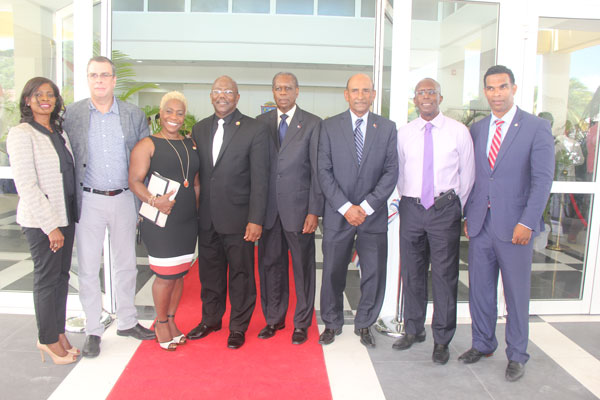 Prime Minister William Marlin in his remarks said in the past he referred to the Government Building as the most expensive pigeon coop or the white elephant with the green cap, but today he is proud to be there celebrating the opening ceremony.

Marlin further explained that people will call it a political decision which he admitted it is because it’s his government made a promise to the people that during this nine months governing period they will complete the government building and move in it before the September 26th parliamentary elections.
He said that government offices are scattered all over Philipsburg. Marlin said that each night he would check on the progress of work that was being done at the building on a day to day basis.

Marlin said that even statements he made jokingly used it against him because he said he would have moved in on July 1st. He said he said over and over that a commitment was made and even though they moved it, all the work is not completed and all the civil servants cannot move it at the same time. He said that the civil servants will move in phases.

He also said that when the other government building is vacant the Charlotte Brookson Academy will be using that building temporarily since they are forced to vacate the space they are utilizing at USM. Marlin said people already are creating fear by stating that the old building has mildew. Marlin said there are only two rooms that have mold and one of is occupied by the Minister of TEATT and so far that Minister and her staff did not get sick. He said the government will take the necessary measures to ensure that students from Charlotte Brookson Academy will be safe. Marlin also thanked all the persons including Glen Carty, and former Lt. Governor Franklin Richards who also worked with the government on several projects.

After the ceremony Marlin took reporters to his office in order for the media personnel to get a view of what he has in his office, it is clear that the government of St. Maarten did not purchase furniture to move into the building, instead they moved the furniture they were using in the old building.

Click here to view photos of the opening ceremony