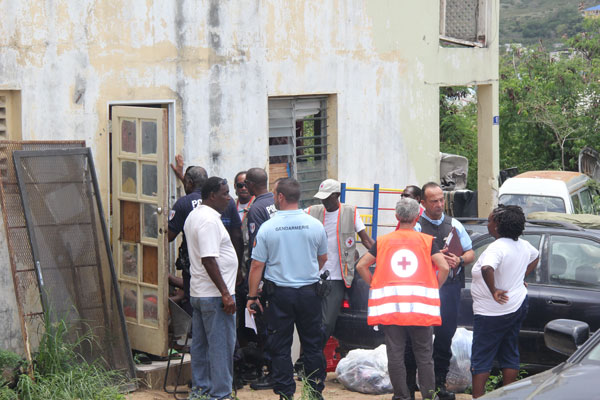 Property owner calling on the State and Collectivity to do what is necessary for him to demolish the building.

French Quarter:— The owner of the dilapidated apartment building situated at 10 Impasse Adams Alexander, Standford Jermin could not get a mother and her children out of the dilapidated building on Friday morning in order for him to demolish the building since he is in possession of a demolition permit.
The woman Vannie Maduro, mother of 14 children most of whom are residing at the I CAN Foundation refused to get out of the building even though the owner of the building notified the families that took up residence in the building that he will be demolishing the building on July 29th 2016.
On Friday morning Standford showed up at the residence with heavy equipment to demolish the building but the mother and her children refused to get out. The Red Cross and their team showed up at the location stating that the woman went to the French Quartier Conseil du quartier and informed them that she will be evicted on Friday, upon reaching the scene the property owner presented the Red Cross with the demolition permit he obtained from the Collectivity of St. Martin during the month of May 2016 but to date he is not able to get the woman who has Dutch nationality to get out of the building that he said is very dangerous. The other squatters including the woman’s brother who was operating a garage at the property cleared the place since they all know that they were not renting the building and also knows that the building is unfit for living accommodations.
At some point the Territorial Police and the Gendarmes showed up at the scene and pleaded with the woman and told her that she has to leave the place since she is not renting and that the building does not have any type of utilities such as water, electricity or even toilets, but the woman insisted that the French government has to find a house for her and her children since according to her they are French because they (her children) were born on the French side of the island. According to information SMN News obtained from the social services, the children are supposed to be placed in foster care but some  for  some reason they are not able to find a home that would take in all of the children. SMN News also learnt that the woman went to enlist for a social home but she was denied because she is not working and cannot guarantee that she will be able to pay her rent and other bills if she is granted a social home on the French side of the island. 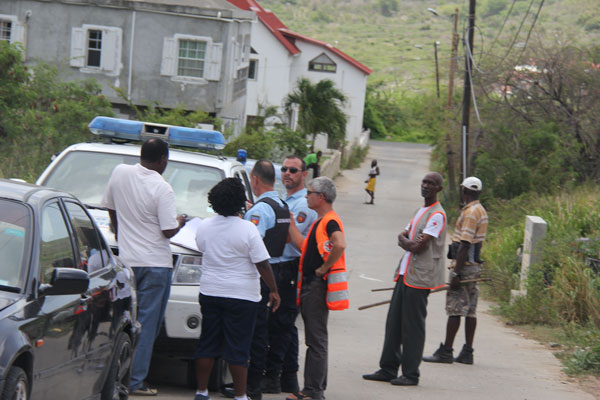 The Gendarmes confirmed that they are now going to work on the case since they had to intervene and they will get advice from the prosecutor and Prefette as to how the property owner should move forward. “I want to make clear that it’s been over 20 years the apartments were not rented out and I am tired of throwing people out. This building was scheduled to be demolished a long time ago but a few years now I fell ill and the people living in the apartments just moved in and lived there freely. I did the best I could by sticking up the demolition permit on the building several times and the last time I did I gave the squatters a date on which the building has to be vacated, but when I came here this morning with the person that has to demolish the building we could not because people are still inside the building. I want to also make very clear that if any of the people occupying the building at this moment gets injured in the event of a hurricane or earthquake it is the Collectivity and the State that will be responsible. I did what I had to do which is go through the legal channel to get the necessary documents to demolish the building, now it’s for those that are elected and the State to do the necessary to get the people out” Jermin said.