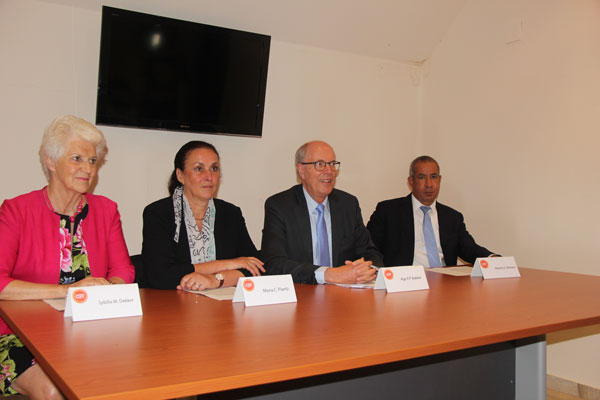 CFT advices all political parties to follow the same framework when preparing budgets.

PHILIPSBURG:— The board of the CFT felt that St. Maarten has made the right turn around, by accepting the advices and recommendations when they prepared the draft 2016 budget that reflects the real income of the country. Chairman of the CFT Age Bakker said St. Maarten attained its country status the budgets were not balanced and instead St. Maarten incurred huge debts with APS, and USZV. Bakker said because of that they advised the Kingdom Council last September to give St. Maarten a specific instruction in order for them to settle the debts with the two entities, in their advice to the Kingdom Council also suggested that St. Maarten be given three years to settle its arrears. He said that as soon as the budget is signed off on the budget, the CFT will approve the budget the minute they get the financial statements from government. He said after the budget is signed off on the budget the CFT then have 14 days to come up with their advice which he firmly believes would be positive.
Bakker said that government placed a caps on its expenditures in order to balance its budget which he said will provide more liquidity while the CFT believes that St. Maarten could manage with its day to day expenses. The current expenditures is kept at NAF.450M, but government could always have a budget amendment if they generate more funds through tax compliances or otherwise. Bakker also confirmed that the CFT did give a negative advice in February but was happy when the Minister took the necessary steps and implement their advice and recommendations.
Bakker said for the first time since 2010 St. Maarten provided a realistic budget, therefore he gave the Minister of Finance of St. Maarten Richard Gibson and his staff lots of credit for the hard work they have done in a very short period. He said his advice to the other political parties is that they should keep the current framework used by the current government to prepare budgets in the future. “This budget sets the stage for the incoming government after the elections in September while they also provide security to the people of St. Maarten now that the debts with APS and USZV are being paid.
Bakker further explained that the economy of St. Maarten is declining and it is important for government and the private sector hold some kind of dialogue in order to boost the economy.
As for the St. Maarten Medical Center Bakker said he saw the plans of the current government which was showed to them by Minister of VSA Emil Lee and he made clear to the Minister that having a nice building is one thing but St. Maarten should strive to provide proper healthcare in order to cut down on the amount of patients that has to travel to Colombia or other countries for medical treatment, however, they believe if proper health care is available on St. Maarten the monies spent abroad will remain in the country. He said while St. Maarten has actions plans in place, but that action plan has to turn into law.
Bakker went on to say that St. Maarten could even borrow to construct the new hospital but that is something they would have to advice on, but for now they are even positive on that aspect.
Asked if the politicians accepted the advice or suggestion he gave on Friday morning when they met with the finance committee of parliament. Bakker said he could divulge the contents on the meeting but stressed that their remarks to the political parties was just an advice.