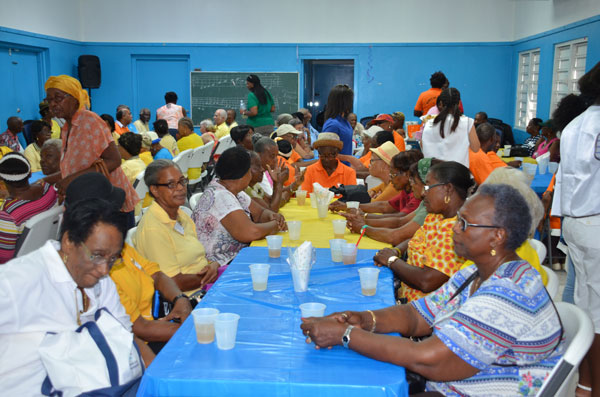 PHILIPSBURG:—- The St. Maarten Lions Club entertained one hundred twenty (120) seniors for the annual Lion Nelson vd Linde Seniors Party. The seniors were picked up by several tour buses at Le Grande Marche after which they were taken on an island tour on the Dutch and French side with several rest stops along the tour route.

A delicious lunch was served to the seniors at the Simpson Bay Community Center after which they boarded the buses again for a short drive to the Explorer Double Decker Party Boat. The seniors were entertained by the DJ Ruby whereby they danced under the afternoon sun and took a 3 and a half hour (3.5) Lagoon Cruise with drinks supplied by members of the St. Maarten Leo Club and the St. Maarten Lions Club.

After the cruise ended the late afternoon, all seniors were bused back to the Le Grande Marche parking lot whereby the individual senior organizations, friends, and families organized for the senior’s transportation back to their homes.

According to 2nd Vice President Lion Alison Busby: “The St. Maarten Lions Club has been looking forward all to do the yearly Lion Nelson vd Linde Seniors Party and decided to do the party a bit different. Rather than having the seniors in one location all day, this way the seniors could see the island’s rapid building development not only from the bus but also on the Simpson Bay lagoon cruise”.

The Lion Nelson vd Linde Seniors Party is one of the signature projects of the Seniors & Morals Committee that the
St. Maarten Lions Club works on each year and raises funds for this and other projects via the Lion Wally Havertong Christmas Bingo Spectacular and their Car Raffle.