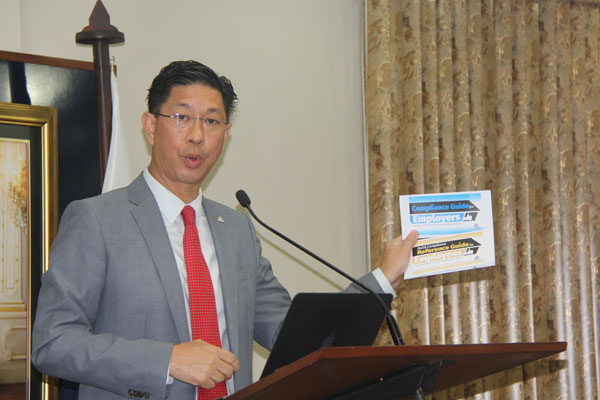 PHILIPSBURG:— Minister of Health and Social Affairs and Labor Emil Lee announced at the weekly press briefing on Wednesday that there are now 54 confirmed cases of Zika on the Dutch side of the island.
The Minister said that the department of CPS has started fogging in targeted area to combat the zika virus and the war against the mosquito. Lee said the war against mosquito is multi-faceted most of which has to do with communication. However, the Ministry has charted a map in order to track the mosquito populations, this he said is to give CPS workers and volunteers a better idea as to where they need to allocate their resources.
He said currently CPS and their volunteers are walking through the various neighborhoods where they are finding many of the same problems they addressed before, one being the proper disposal and collection of garbage, old tires that are being stacked up, cistern overflow that is not properly covered and also water that is collected from air conditions. The Minister said even the cap of a bottle can harbor the breeding of mosquitos.
At the moment he said CPS is conducting fogging in targeted area, simply because fogging all over is not as effective since the pesticides used would also kill other insects and even increase the breeding of mosquitos. Lee said that his Ministry has established its own website where they post photos of what they found in the various neighborhoods, as well as the same information that can be found on the government website. Lee said the only downside to this is that his website may not be completed before the elections. (ministry.vsa.sx)
Asked if the Dutch side is coordinating the fogging with the French side, the Minister said that CPS is working closely with the French side as they fight the war against mosquitos.
Employers/ Employees Compliance guide now available.
The Minister also announced that the department of Labor now has in place pamphlets that outline the rights of the employer and the rights of the employees. He made clear that these are projects his Ministry working on. These pamphlets will be distributed to businesses who often time complaints that they do not know the rules. He said since the government is working on compliance they feel there is a need for both the employers and employees be fully informed when it comes to taxes and other dues that have to be paid.
Asked by SMN News if he is aware that a former employee from the department of Labor and Social Affairs that is now on pension has a job placement agency that is hiring workers for a number of large companies but has not been paying taxes or even medical for their workers.