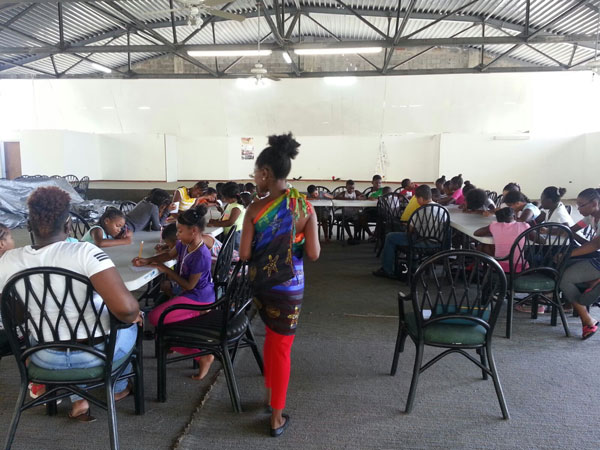 GREAT BAY:— “The future writers of books about St. Martin Thanksgiving (first Sunday in December) and our other cultural ways, historical people, family stories, and other aspects of our beautiful island are the children of today,” said author Felecita Williams this week.
Williams is not just hoping to have St. Martin writers in the future. She got an opportunity to convert an “I’ve got talent writing class” into a book writing workshop for children ages seven to 12 at a vacation camp in Cole Bay.
“The original idea was to write a story about their talent but the entire exercise became how to write their own book. There were about thirty-seven kids total,” said Williams. The author conducted the workshop last July for the Christian Fellowship Church Vocational Bible School (VBS).
“I began by sharing that I wrote a book about my own story. I showed them my book; explained that a book has a title, which is on the front cover with the author’s name, and sometimes with the author’s picture on the back cover. I talked about the inside of the book, which is a story with a beginning and an ending,” said Williams.
“I shared writing and publishing tips that I remembered from my editor Mr. Sekou and House of Nehesi when they worked on publishing my story in book form,” said Williams. Williams’s book, Because of Prayer (2010), is about her life-threatening health and medical experiences that started at age seven and that led to her kidney transplant at age 18.
“After explaining how a book is put together I gave them a little assignment to write and title their own books. They had to draw and color their books,” said Williams.
“I remembered what Mr. Sekou said about George Lamming, how we can use our island resources to create and, so, to decorate their books the children used shells from the beach that they had collected before my class,” said Williams.
Williams said that she divided the children into age groups “with a head teacher that mainly assisted them.”
“The majority of the kids were enthusiastic to write their story and make their own book – which they now have. A few did not want to write at first, but in the end they all accomplished their assignment with what I think was amazing talent!” said Williams.
“I can remember hearing more than one child asking, ‘Teacher, can I help you?’ as I was laying out and completing the books. We even made up the ‘AMBER Publishing & Production’ company to publish the books,” said Williams.
“At the end of the VBS vacation camp week the hand-crafted books were displayed on a ‘book table’ for the parents, other family members, and friends of the children to see,” said Williams. Since the publication of her own Because of Prayer, Williams has regularly given motivation talks at schools in St. Martin. She has also traveled in the Caribbean, the USA, and the Netherlands for readings and book signings.