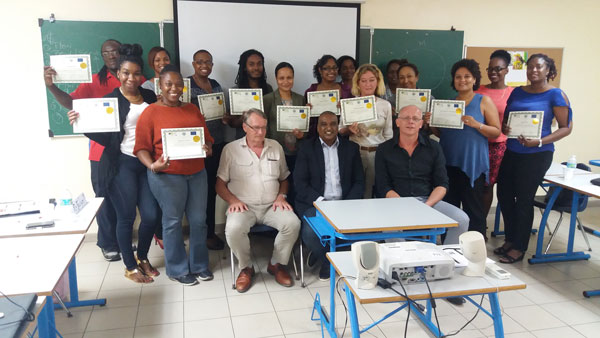 Pond Island:—- The European Union funded COSME Programme, hosted two very successful three-day workshops focusing on “21st Century Entrepreneurship” in cooperation with the University of St. Martin (USM). A total of 34 participants received their certificates with much appreciation. The facilitators Mr. Prakaash Rostam and Mr. Erwin Wolthuis were thanked for their contributions and praised for their original and innovative approach.

Mr. Prakaash Rostam, Key Expert SME & Private Sector Development Specialist, stated that entrepreneurs throughout the 12 Caribbean Overseas Countries and Territories (OCTs) shout for direct assistance and support in starting their businesses; as well as for further developing their companies; as the global economic challenges put them in challenging positions. Awareness, skills development, knowledge transfer and sharing information in the most extensive form, has been identified as some of the key success factors for Small Medium Sized Enterprises (SMEs), especially in the Caribbean OCTs.

The reactions of the participants are clear. Everonique Levenstone, owner of the Proactive Group of Companies stated: “I am thankful for this great opportunity on building ourselves for a bigger and brighter future. I really appreciated this presentation because it was not only about 6 C’s to apply to your business, but everything taught goes hand in hand in our daily lives as well.” Loic Bryan, CEO of Artistic Drive, added that indeed the course was great and that he would love to see more follow-up courses. Mr. Rostam concluded with saying that he was very pleased with the success of this first series and that possible follow-up will be announced through the press in due course.