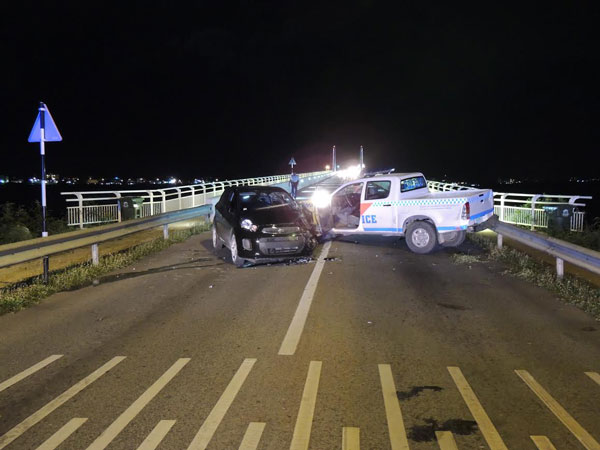 PHILIPSBURG:— The Detectives and traffic Department are investigating a case in which a male suspect who was driving a black vehicle with license plate 4081 AAC was arrested after police ordered him to stop his vehicle. The incident took place on Monday, August 15th at approximately 12.30 a.m. in the Cause Way Bridge.
The vehicle in question was seen by a police patrol driving on the Airport Road in the direction of Cole Bay and was ordered to stop for control because of the heavily tinted windows. The driver refused to stop and increased speed in the direction of the Cause Way Bridge. Another patrol was called in to assist in order to stop this vehicle.
A roadblock was set up at the Cause Way Bridge by one of the patrols, however, the driver of the vehicle could not stop the vehicle and collided with the police vehicle causing quite some damage. The driver and no one else was injured.
The police conducted an investigation inside of the vehicle because of the strong scent of marijuana coming from the vehicle. During the search, two firearms were found and confiscated. The suspect was arrested at the scene and taken to the Philipsburg police Station where the suspect remains in custody fro further investigation.