St. Maarten is one step closer in getting a general hospital 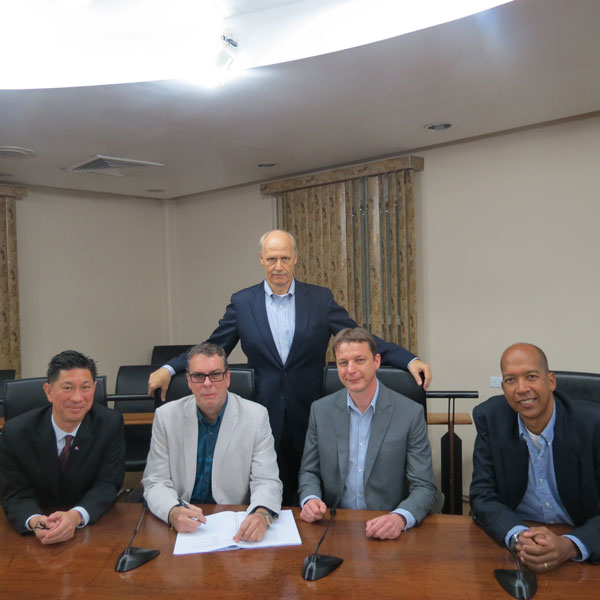 PHILIPSBURG:— On Friday February 26th Social and Health Insurances SZV signed a consulting contract with Dutch engineering firm Royal HaskoningDHV as part of the first phase of the development of the new national hospital of St.Maarten. Royal HaskoningDHV was one of the four companies that submitted proposals as part of a bidding process managed by KPMG.
Present at the signing were Minister of Public Health Emil Lee, Glen Carty – Interim Director of SZV, Robert Jan James – Supervisory Board member of SMMC, Eduard Boonstra of Royal HaskoningDHV and Henk de Zeeuw of KPMG as project manager. The engineering firm has its head office in the Netherlands and specializes in sustainable and innovative hospital solutions globally. Royal HaskoningDHV will be teaming up with ICE NV, a local engineering consultancy on St. Maarten.
The four consulting engineer bids that were received mid-February; Lievense, Arcadis, ICE NV and Royal HaskoningDHV, were evaluated by representatives from the Ministry of Public Health, SZV and SMMC with support of legal and financial council. The evaluation criteria’s were; expertise in development of hospitals regionally and globally, pricing and use of local resources. Royal HaskoningDHV presented the most attractive proposal based on expertise, pricing and local content.
Royal HaskoningDHV is an independent international engineering and project management consultancy that will bring over 130 years of experience to support SZV and the government with this project. The firm’s portfolio includes projects such as the Honliv Hospital in China, Hvidovre Hospital in Copenhagen- Denmark, Erasmus Medical Center in Rotterdam – Netherlands, Maasland Hospital in Rotterdam – Netherlands and many more.
Royal HaskoningDHV will now be a part of the second phase of the new hospital project which is to prepare the tender documentation in search of a turnkey developer, this should be completed in May of this year.
Minister Lee congratulated both SZV and SMMC with this important milestone and welcomed Royal HaskoningDHV to St. Maarten. Minister Lee commented, “I am delighted to see that the open approach to the construction of the new general hospital by SZV, under the leadership of Glen Carty, is bearing fruit already. I am thrilled with the choice of Royal HaskoningDHV in partnership with ICE NV. Engaging with a local company was an important part of the selection criteria. As much as possible, the money that is invested into the process of building a new hospital should stay in St. Maarten. This creates employment and stimulates the economy. I’m looking forward to the next steps.”